When the motorways were being engineered, they appear to have under-estimated how many people would drive to the West Country during the summer. Even when Michaelwood was being designed in the 1960s, the formulas said very few people would be using the services, so two temporary buildings were built to hold the fort until the traffic levels had risen enough to warrant building full services.

Invitations to tender were sent out in 1969, with the project titled "Michael Wood services", named after the surrounding woodland. Responses were received from Mobil, Esso, Texaco and a joint entry from Shell and BP, with Mobil being declared the winner.

Their amenity building consisted of toilets and a workshop on one side of a walkway, and a shop and a snack bar on the other. Originally the restaurant had large windows, a brown tiled floor, green bench seats and oak-coloured tables.

The temporary buildings were deliberately placed next to the motorway, so that the best position (offering "woodland views") would become parking areas that could easily have new buildings built on them. Thornbury Rural District Council wanted to see a caravan park built here too, but the Ministry of Transport said it would be difficult to run and would be abused. The Ministry did, however, build some extremely high-standard entry slip roads, probably to leave space for the expansion.

After the service area opened in 1971, Mobil tried to hand their contract back so they could bid for a better one. It was eventually renegotiated without being opened to rival bids.

The original plan of building a whole new service area was quickly abandoned. Instead, the existing walkway was extended to offer more facilities. The Department of the Environment called it "incomprehensible", as the temporary buildings had been sited in the worst possible position.

This did inadvertently create the unusual layout where the two sides are completely identical, as they both have the amenity building tucked away at the back. A footbridge was provided as part of the expansion work, linking the two sides for the first time. 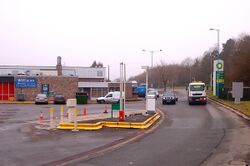 In 2001, Welcome Break considered completely rebuilding the entire site, moving the amenity building closer to the front. Instead, in 2011 the car park layout was changed around. This created a long car park with a snack bar at the back, trying to manage the high flow of traffic during the holiday period.

In doing so, the petrol stations were moved away from the back of the building, losing the original 'something temporary' plan which had created this unusual service area.

The majority, but not all, of the coverage of the service area continued to spell it as two words. In around 1991, Welcome Break changed their policy and all of their publicity since has spelt it as one word. This matches the nearby farm, makes it look less like somebody's name, and changes how it's pronounced.

The road signs, which were last updated in the early 1980s, continued to use the old name, meaning this is what most people used. It wasn't worth the cost of changing the signs over something so minor.

Eventually the road signs all needed to be replaced in 2014, and the new ones spelt 'Michaelwood' as one word, making this spelling official.

In 2021, Which? Magazine ranked Michaelwood 37th out of the 68 service areas they visited.

In 2015, the services were rated as 4 star by VisitEngland.

In 2008 the services won a five star loo award.

In 2000, The AA rated the services as "poor", because of its "unattractive buildings".

A 1978 government review said that the services were just a large and badly-managed petrol station, which was "giving service stations a bad name".

In 1977 Egon Ronay rated the services as "appalling", calling it "drab", "scruffy" and "tired", with a poor choice of food, incompetent cooking and dirty toilets with no hand driers.