Which is the smallest or quietest services? 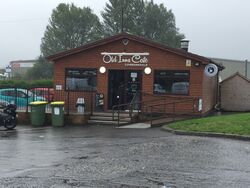 Old Inns is tiny - but does it count?

This question is more complicated than it ought to be.

If we take "motorway services" to mean any service station that is signposted from a motorway (as we do), then Old Inns (on the M80) has little more than a petrol station. This means it is likely to be both the smallest and the quietest.

The problem is this wasn't intended to be a motorway service area, it just became one by a recent fluke of history. As a result, people tend to treat it more like an A-road site, which is what it was designed to be - and A-roads have hundreds of tiny petrol stations!

Of the motorway service areas that were always intended to be one, Severn View on the M48 has a tiny building and low trade, but it is built on huge grounds. The winner is likely to be back in Scotland: Kinross on the M90 is very quiet, and the building at Bothwell on the M74 is smaller but built on larger grounds.

A special mention should be given to Cullompton, which is the smallest service area to be on a very busy motorway - the M5 - and also to Pease Pottage which started out tiny but has grown to become huge.

As already stated, there are a lot of small A-road service areas. One of the smallest to receive full signage is Ponton Main, which surprisingly is on the very busy A1. Leicester Markfield offers some of the least facilities, but it's built on large grounds.

As for the quietest single day - if you rule out issues caused by road closures or other traffic issues - it's almost certainly going to be Christmas Day or New Year's Day, probably in the 1960s.