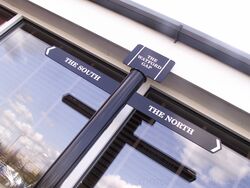 Watford Gap services is regarded as the middle of the country - but it's not the most central.

Arguably every page on this website contains trivia about the UK's motorway service areas. This page summarises the key facts, which may one day come up in a pub quiz.

If you really want to complete your service station-themed pub quiz, you may also want to take a look at: Service Station Or Cheese?, The Emoji Round and 8 Quiz Questions.

The most southern: Hayle on the A30, or for motorways only: Exeter on the M5

The most eastern: Acle on the A47, or for motorways only: Folkestone on the M20

The closest to the meridian line: Cambridge on the A14 is almost on it, or for motorways only: Clacket Lane on the M25

The newest motorway service area is currently Rugby on the M6, which opened on 30 April 2021. 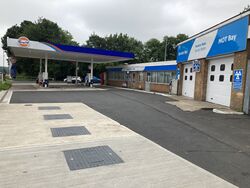 Ponton Main might be the smallest service area to receive full signage.

Cobham on the M25 is believed to be the UK's biggest and busiest service area. (full breakdown)

Old Inns on the M80 is probably the UK's smallest motorway service area. Ponton Main on the A1 might be the smallest place in the UK to get full "Services" signage. In terms of facilities, Leicester Markfield on the A511 has much less to offer, but it still manages to be bigger. (full breakdown)

The longest official name for a service area is "Heart of Scotland (Harthill)" on the M8. Without the brackets, Leicester Forest East and Blackburn with Darwen would be joint longest, but Harthill's brackets are clearly part of its name. Swansea West is longer if you count the full sign including the Welsh translation, but that's very clearly a translation.

The shortest name for an official service area is "Ely" on the A10. For motorways only, there are a number of candidates, including Birch, Blyth and Tebay.

How many service stations are there?

As you might expect, it can get very complicated. Visit the page How Many for a full breakdown.