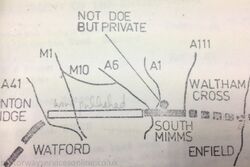 There have been two main amenity buildings at South Mimms - but there was also a much older complex which pre-dates the motorway network. This is the history of the services. 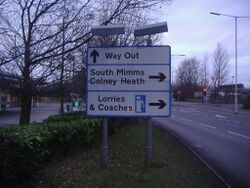 The road through the services.

Bignell's Corner is the name given to the area immediately surrounding South Mimms services. It is the official name of the M25/A1 roundabout, though the junction is better known as 'South Mimms Interchange'.

The name (and the services) date back to the pre-motorway era, where the A1 Barnet By-Pass and the A6 St Albans Road met at a busy triangle-shaped junction, which is where the [St Albans Road roundabout] is now. Scattered around the junction were two pubs, a garage, a garden centre named Bignell's (hence the junction's name), a motel and a truckstop.

The truckstop was known as the Beacon Café, and was popular with lorry drivers heading in and out of London and also infamous for its use by prostitutes. The motel was built in 1966 as an Esso Motor Hotel, which became Crest Hotels. Everything to the west of the road, including the pubs and the garage, closed in the 1970s to make way for the new A1(M). [view a map from the time]

Slightly to the south, the early 1970s the modern interchange was built, but it originally served the realigned A1 and A6/A1178, plus two local roads, one of which looped past the truckstop and on to the village of South Mimms. The truckstop would be owned by Deards, and promoted as 'Beacon Services'. There were also fragments of the old St Albans Road, chopped up by the motorway, still serving Charleston Paddocks.

Meanwhile, a study into services on the M25 was underway. This started at Sevenoaks and worked its way clockwise, suggesting services at Leatherhead and Colnbrook. These were engulfed by planning difficulties, and with the rest of the planning depending on knowing where those services would be, it was decided to leave the rest of the road for now.

Aware that this strategy could backfire, the Department of Environment did at least note that there were already services at Bignell's Corner. At the time, all motorway services were owned by the DOE, but this unusual "privately owned" collection of facilities was first formally acknowledged as a potential part of the M25 project in 1975.

In 1984 it was confirmed that South Mimms would join Thurrock and Clacket Lane as the M25's service areas. A motorway maintenance depot was set up here too.

"The building is something out of Legoland, orange and cream brickwork and a pagoda theme."
The Guardian, 1989

BP's enthusiasm for building a service area here made it the first in the country to be classed as a "private initiative", where the private sector did most of the legwork. The Department of Transport then acquired the site, and leased it back to BP on a 125 year agreement - the longest service area lease in the UK. The Department of Transport said they followed this process to take advantage of BP already owning most of the land, saving them time.

South Mimms became the first service area on the M25, with new facilities opening on 6 June 1987 at 1pm. Prime Minister Margaret Thatcher (who had cut the ribbon for the M25) attended a ceremony here. A refurbished 26-pump filling station had opened in December 1986, which was expected to become one of the busiest in Britain.

BP chose to the lease the main amenity building (designed for cars and coaches) to Hanson's Welcome Break. In 1986, Welcome Break was taken over by Trusthouse Forte, who decided to brand it up as one of their own service areas. The building was compared to a supermarket from the outside, and an airport lounge from the inside.

The new amenity building was built over surrounding fields, Five Bells Farm and the garden centre. It had a 426-seater The Granary restaurant decorated with fake palm trees, Julie's Pantry, a take-away restaurant (later Caffe Primo) and two meeting rooms which boasted photocopying machines, fax machines and a mobile telephone; these facilities were meant to entice businessmen who had been left out of most other services. A Sweet Delights counter was soon added.

It had 700 car parking spaces, and cost £7,000,000 to build. 250 jobs were initially created. Forte ran recruitment campaigns across the country with the message, "move south to one of the best working environments around".

Less than a year after Forte had decided to brand South Mimms under their own name, they then decided to change all Trusthouse Forte service areas to Welcome Break. A Little Chef was added, as well as a drugstore and a bureau de change. The main restaurant had a counter service which issued numbers, so that the food could be cooked to order. 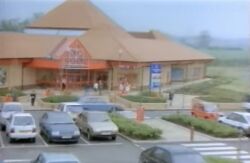 Concern was raised by the Department of Transport's Road Construction Unit in 1989 that the roundabout outside South Mimms was turning into an "acute problem". It was already severely overloaded, and they felt this would only be solved by building two new flyovers. That would in turn direct traffic away from the service area, which could prompt a significant request for compensation.

Widening the A1(M) soon became government policy, and while no detail was given, inspectors warned that there would be a "severe impact" on the service area. In the event the decision was taken to keep squeezing more capacity out of the existing roundabout, so there was no case for compensation.

Despite this, a new Travelodge was built in late 1990. This would become Welcome Lodge, Days Inn and then Ramada.

A 1994 study found that the M25 here was the busiest motorway in England to have a service area. It may no longer be in the top spot, but it will still be a lucrative location.

During the 2021 fuel crisis, the queues to buy fuel at South Mimms caused a lot of disruption to local residents, who rely on the roads around South Mimms to go about their business. Given its prominent location and its reputation for staying open, South Mimms became one of the UK's busiest places, with severe queues at all times of the day and night, except for the periods where it had run out.

The main petrol station (for cars) continues to be on land owned by the authorities - now National Highways - which is leased to BP.

In the government's list of assets, South Mimms services was valued at £2,000, making it the country's least valuable motorway service area. This may be to do with its very long (125-year) lease, or because it accounts for how much of the land has already been sold. 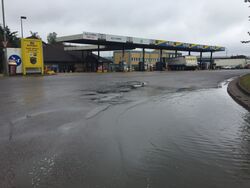 Signs at the exit from the main roundabout split traffic into "car services" and "lorry services", as they still do today. The lorry services were owned by BP but leased to Deards, the existing truckstop business.

Shortly after the main service area officially opened, the old truckstop that had been expected to provide all the HGV facilities closed. In September 1987 an investigation found that Forte were preventing HGV drivers from accessing the services, although Forte denied this. The same investigation described the area which HGVs were expected to use as "unmarked, unlit, not signposted, and very cramped", with a café that was "abandoned" and "dilapidated".

This situation caused considerable tension between Forte and HGV drivers, with the Transport and General Workers Union almost arranging a boycott of all Forte facilities. The problem appeared to be that HGV drivers weren't banned as such, but they were directed out of sight to a position where they couldn't walk to the main facilities even if they wanted to. Some HGVs were parking in the coach park and refusing to move.

In November 1987, BP announced that they were involved in "tripartite discussions" regarding the abandoned truckstop. It reopened as a BP Truckstop in 1989.

The BP Truckstop received mostly positive feedback, but BP ended their truckstop business in 2002. In the months that followed, its reputation collapsed, with surveys suggesting it was the worst truckstop in Britain. Welcome Break took over and spent £90,000 refurbishing it. The site still mostly consists of BP corporate signage, with the most obvious Welcome Break clue being the parking signs. Welcome Break did not provide it with much publicity, instead relying on the signage. In 2012 special "South Mimms Truckstop" signage was introduced.

In 2021, Which? Magazine ranked South Mimms 56th out of the 68 service areas they visited.

A 1995 review in The Independent gave the services three stars, calling it "modern and pleasant".

A 1994 study found that the service area was 1.78x more popular with traffic trying to travel east along the M25, than that trying to travel west, as a consequence of the layout of the roundabout.

In 1991, a Which? survey recommended the service area.

In 1989 the Landscape Advisory Committee described the services as "first class", a rare honour. Also that year, it was a runner up in the Auto Express survey.

In 1988, Commercial Motor Magazine complained about the restaurant being expensive and slow, reporting that one driver had been waiting 90 minutes.

"It will be one of the largest, most modern and technically advanced motorway service areas in Europe."
Trusthouse Forte, 1986

The service area had to be rebuilt following a large fire on 13 August 1998 caused by an unattended frying pan in Julie's Pantry. The temporary building which was used whilst the services were being re-built was then sold in an online auction.

The on-site motel was built in 1990. Government policy ought not to have allowed it to be built because the land was prioritised to expand the services, but as there was no nearby suitable place for a motel, it was decided to allow it. Despite this, the historic, existing motel survived the changes and went on to become a Premier Inn.

The replacement (1999) service area building originally housed a mixture of free-flow sit-down catering and coffee shop/fast food space. In 2014 that was overhauled to become entirely fast food based, and extensions have allowed a trial Ed's Easy Diner and Pret a Manager. The Ed's Easy Diner, built in a separate building to encourage day-trippers, was closed after two years and replaced by PizzaExpress.