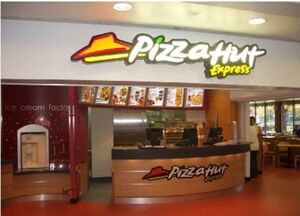 Pizza Hut is an international pizza brand which was available in express format at several motorway service areas. It was tried by several different operators but never deemed successful enough for more to follow.

They were included in Granada's re-brand in 1996. Granada said they were trialling the possibility of it being used at many motorway service areas.

Shell recently reintroduced Pizza Hut Express to their site at Beaconsfield, alongside a revised Deli2go hot food station. This was short-lived as it was later replaced by Jamie Oliver deli by Shell as part of a forecourt upgrade.

A Pizza Hut takeaway kiosk opened in EG Group's Forrest Park site in early 2022, replacing what was a Sbarro unit.

Pizza Hut Express used to be found at the following official service areas: