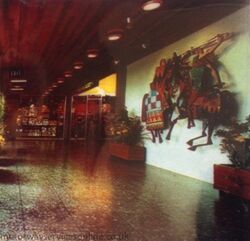 Trowell is one of few service areas which were initially handed to a smaller firm - this is the history of it.

Bids to operate the services opened six months late, describing it as a 24 acre site. Responses were received from Regent Oil, Top Rank and Mecca Leisure. Rank wanted a bridge-design with the views looking away from the motorway, but they offered a very low turnover and were rejected.

Mecca Leisure's hyper-local approach (using décor that had local connotations) helped them win the contract but this approach of theirs wasn't reserved for Trowell: in fact both Mecca and Rank bid for Hilton Park just a month later, and Farthing Corner and Toddington earlier. They later bid for Corley too. None of these bids were successful for Mecca, and it's not clear what design they would have used at any of those sites.

Like all service areas, Mecca's grand design and insistence on providing the highest quality meant it was soon struggling financially. In its first year it lost £50,000. Unlike rival firms, they were not willing to cut corners to save cash, and rather than do that on 3 September 1977 they sold the site to Granada, who inherited it in October.

When it opened on 23 March 1967, operators Mecca Leisure insisted that visitors thought of it not as a service area but as a "village". The site was entirely themed around Robin Hood. This was all removed when Granada took over. Much of the specialised stock had caused Mecca Leisure trouble as they were not approved for sale on motorways at the time. 300 staff were employed.

"This is a unique and thriving entertainment and service community."
Mecca Leisure, 1967

It was broken into eight blocks of buildings. The northbound side had a small, two-storey building. This was connected by a footbridge to the southbound side which had an area raised above the exit road, while the rest of it was on the ground floor. The main restaurant, on the southbound side, was called The Sheriff's Restaurant, which had 190 seats and was open from 7:30am until 2am. It was a modern restaurant with an elaborate grill section where customers could observe their dish being preparation within minutes, as well as large windows overlooking the traffic.

Two café's, one in each upstairs area, were called Forest Cafe, each with 150 seats and open until 11pm. Artificial trees were used inside all around, with a real garden outside. There were 100 vending machines in use around the site.

In the entrance hall was a novel '60s feature. It was a large board with a map of the M1 on the left, and a map of the service area on the right. Above this was a grid showing Leeds, Sheffield, Nottingham, Leicester and London. Along the top were the words "sun", "fair" and "rain". A light would then display for each city showing you what the weather was. Next to it was another system of lights, showing you which restaurants were open. It's not clear how long this display was in use for.

The cafés were long rooms with windows all on one side, the other side having the service counter screened by tinted glass. Green trays were used. The main restaurant had a green and red tinted ceiling, red lampshades, Tudor-style oak furniture and a red and green carpet with a leafy pattern. There was a zig-zag shaped counter on which to sit, as well as ordinary tables with place mats.

Mecca called their facilities "an oasis on a concrete strip"; they wanted to be different, but to meet the public's needs. Toilets and a shop were on each ground floor, as well as a children's paddock and petwalk. The forecourt had 30 pumps on each side. A preview day was held for the Trowell Friendship Club.

By the side of both buildings was a large grass area, which has now all been developed over. Covered and decorated walkways connected the main entrance to what they called the "coach promenade", as well as the main car park on each side. In each lorry park was a small transport café seating 60 people, with four small pyramids on its roof and a corridor leading to the entrance. It was open from 7am until 11pm.

Mecca's architecture did not impress inspectors, who said such a rural location did not deserve such an unsympathetic design. The bright cladding around the forecourt was described as particularly distracting. The southbound upper deck actually extends over the slip roads, to take advantage of the limited space available.

In 1977 Egon Ronay made a rare positive comment about the services, describing the food as "almost good on occasion". It was the only place which he said was trying to provide a "comfortable, restful, pleasant restaurant", and appreciated the "extensive" menu. The café was not as good was the waitress service, but was still clean with prompt service.

Fuel was available under the brands Regent, Gulf, National, Esso, BP and Shell. Each pump came with its own wing-shaped canopy.

Sir Owen Williams, who did much of the M1's design work, wanted the service area to serve as an exit for a farm, but was told it couldn't. 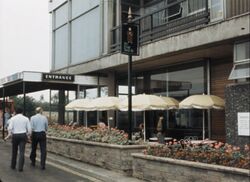 The pub at the front of the service area.

Perhaps the most unusual concept introduced by Mecca Village was the service station's very own pub: The Friar Tuck-In. It was a large facility positioned by the main entrance, with its own bar and outdoor seating. Its name was a pun on the Robin Hood character Friar Tuck.

The pub's menu was entirely alcohol-free. Mecca Village said it was aimed at families as well as lorry drivers, and was provided in response to a number of drivers bringing their own alcohol from home and consuming it in the parking areas.

The pub would have opened in around 1975. 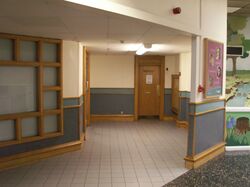 The former upstairs restaurant is now used as an office.

As a road safety trial, Mecca trialled a car wash here, but Granada removed it. Mecca's final work was to change the petrol station to a standard, self-service layout.

In Granada's first few months, they began a process of what they called "modernisation". A new coffee shop was introduced, and the upper level was initially stripped down to provide a more automated experience (with a conveyor belt to place dirty dishes on). This was called Platters - it closed in winter and it later became office space. The pub was closed too. The initial feedback was poor; in 1978 Egon Ronay downgraded Trowell from "good" to "poor".

In 1980 the two transport cafés were closed and became offices. They became effectively abandoned, and the northbound one was demolished in around 2002 to make more space for lorry parking. Lorry drivers were instead given a roped off area within the main restaurant.

A Burger Express opened in around 1984. On 7 April 1988 Edwina Currie (MP for South Derbyshire) officially opened the new Country Kitchen Restaurant on the southbound side. The new restaurant was described as a trial by Granada. There was another refurbishment in 1989, where Granada said they were going "upmarket". This included the addition of 'Business Point': an office suite with a secretary, fax machines and Teletext.

In 1987, Granada proposed adding a Granada Lodge to the northbound side. In 1990 they suggested converting the former northbound upstairs restaurant area, and received permission, but didn't do it. The lodge opened in 1996 as a Granada Lodge.

Plans were announced in 1989 to widen the M1. This could have had a significant impact on the service area, but when it eventually happened in 2009, no new land was needed. An unusual backlit motorway sign referring to the service area had been attached to the motorway bridge at Waterloo Lane when it was first built; it was now faded and difficult to read, and was finally removed as part of the roadworks.

On the northbound side, a tourist information centre was opened in a portable building in 1991. By now the building was painted bright white and red all around. A Burger King was provided in the former Marian's Pantry, on the northbound upstairs landing. The full restaurant remained on the southbound side, though Granada noted very few people were making use of the bridge between them. Part of the car park was leased to a pallet business which traded until 1999.

Until about 1996, the entrance to the toilets was still separate to the entrance to the rest of the building. At this point the two were combined to work with a single entrance. There was still only a small foyer, linking the shop, toilets and stairs. An extension was proposed to house a new game arcade, but this was replaced by a decision to build a Little Chef in 1997. This opened in an extension on the far left of the building, with steps up to it from inside the building.

A new southbound dining area was added to the lower level; that was then extended to provide one of the first mini-shopping malls. Shops included Tandy and Sock Shop, Superdrug, Clinton's and Thorntons.

By this point most of the greenery around the building had been built on. Parking was charged at a rate of £5 for cars and £7 for HGVs, with a £60 penalty fee.

Granada were given permission to change Trowell's name to "Nottingham" in June 1996. The proposal was abandoned due to the cost and poor reaction, although the new name was used in some of their publicity.

In 2002, a large extension to the northbound building opened. This added a large seating area, with more natural lighting, and allowed Burger King to move to the ground floor. In 2006 it was accompanied by a second half, which added a new retail area by the entrance. The Little Chef was later converted to become a large M&S Simply Food. Cladding was placed around the distinctive upstairs restaurant windows, where the offices now are, covering it all up. Which? were very impressed when they visited in 2006, calling it "dull, uninspiring, noisy and gloomy".

On the southbound side more recently, in 2016 the redundant units added to the front of the southbound services were used to create one of few indoor West Cornwall Pasty Company units.

During early 2017, the southbound EDC restaurant was removed to make way for a M&S Simply Food store which opened in February 2017 to join its northbound counterpart.