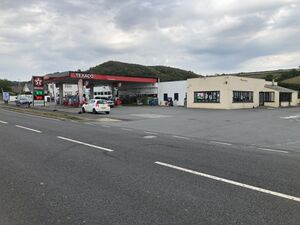 Llanrhystud is the only signposted service area on the A487, which once offered a lot more than it does today.

It is rare for a petrol station to receive services signs when it is so close to a village, but in this case it may be the village doesn't want traffic stopping in it.

The site started out as the home of Aberystwyth Cars in the 1970s which later gained fuel facilities.

It was later developed into a full petrol station with a café and restaurant. It became a Shell filling station in 1996, and then gained a Costcutter store in the 2000s. A large car wash and jet wash were added in 2008.

By 2011, the forecourt had been rebranded to Texaco. The café and restaurant later closed in around 2014.