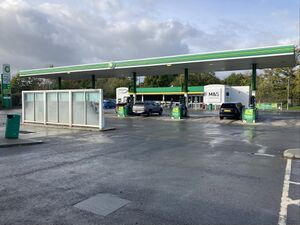 A relatively new addition to the A24, signed from the Ashington bypass. 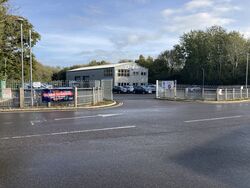 The Ashington Bypass was opened in 1994. The construction of a new interchange to the north of the village opened up a new area for development, and plans for new services were put forward immediately. Many more followed, from large developers and much smaller ones.

In 1998 a proposal was made by Granada, who were most likely hoping this could be their newest branch of Little Chef. Proposals for a restaurant and petrol station continued through the 2000s, with one proposal dated late 2007 from a firm called "Motorway Developments Services Ltd" specifically naming Little Chef as one of their occupiers. The last brand new Little Chef to open was in 2002, and by 2007 it was contracting fast, so it's not clear how keen they actually were to work with this developer.

Highways England permitted temporary signage to be placed on the main A24 advising passing traffic that services are now here, but they haven't yet stretched this to full signage.