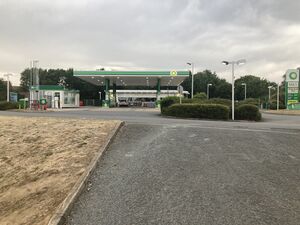 A5076 Upton Way northbound at Upton

Sixfields was developed as a service station for the main A45, but subsequent development has caused it to become more of a local facility. The site is only signposted when heading northbound however is easily accessible in both directions by using the nearby roundabouts. 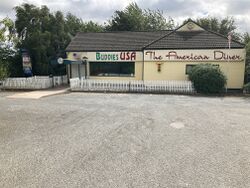 The former Buddies USA Diner sits empty with its branding still on show.

Upton Way was built in the 1980s as a western bypass for Northampton, and it opened as part of the main A45.

The Travelodge later received an extension in 1996 and a year later the filling station was rebranded to BP following the merger of Mobil and BP. There were also plans in 2000 for the Little Chef to gain the Little Chef Choices format by owners at the time Compass in a new extension of the restaurant, but this never happened.

The Little Chef closed eventually closed in 2004. Enquiries were received from Vets4Pets and Harry Ramsden's, but the restaurant was instead bought by local restaurant chain Buddies USA Diner. Buddies later extended the restaurant in 2010. Following the coronavirus lockdown, the Buddies permanently closed in summer 2020.

American fried chicken chain Popeyes have expressed an interest in the former Buddies building and intend to open one of their restaurants here. 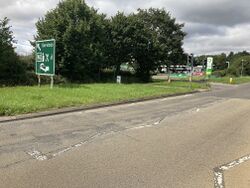 The large services sign that sits next to the roundabout.

At the time it was built, the A45 was a fast road with no nearby housing estate and without the two roundabouts at Upton. As a result, the service area was treated like any other service station on a major road, although Forte were probably hoping it would appeal to locals in Duston too.

Upton and the two roundabouts serving it were built in the late 1990s, transforming the A45 (renumbered A5076 in the 2000s) into a local road. This gave the service area less through traffic, but lots of local residents to serve.

Despite this, as of 2021, the road signs referring to the services still pre-date the A45 becoming a local road. As a result, they are much bigger than any other sign in the area, they are the wrong colour and one of them is awkwardly placed practically on the roundabout. It is most likely that the local authority (who inherited the road) has no record of the signs being there.