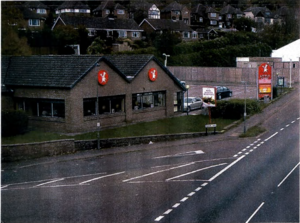 Guildford services was a small service area built next to the southbound carriageway of the A3, at the crossroads serving Onslow.

The Guildford Bypass opened in 1934, and a garage and filling station was built next to a crossroads. Onslow village was built at the same time, next to the garage. The garage was later run by John Coombs, the racing driver.

By the 1980s, upgrades to the A31 and A3 had increased the traffic levels considerably, and the old garage was now branded BP. A Little ChefHistory opened in 1988. By modern standards the service area was small and had a dangerous entrance, but in the context of the A3, an outdated, narrow, road with frequent crossroads, it was able to fit in seamlessly. A number of industrial units joined the services.

As Guildford grew, a number of competing facilities moved closer to the services, including a large supermarket. Locals found it easier to use other petrol stations while long-distance traffic probably didn't see the forecourt until it was too late. In 2007, the BP garage closed and was demolished.

The Little Chef continued to be signed as a sole property making up the services. In 2009, the Little Chef closed, and it became a branch of American Golf, who extended the building.

The slip road arrangement, although not clearly defined because it passes the demolished petrol station, still exists to serve the golf shop and industrial units.