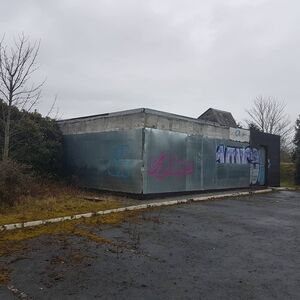 A former dual-sided service station located on the A14 near Newmarket, Kentford services has been derelict for quite a long time.

The A45 (now A14) Kentford Bypass opened in 1975, and within the next few years a dual-sided service area with a pair of Little Chef restaurants and BP filling stations had opened.

In July 1997, the forecourts closed and were later demolished, but the sales shops were left to stand. The Little Chefs continued to trade on and in fact there were plans to turn the westbound side into a Burger King drive thru, which didn't happen.

Some time between 2003 and 2005, both Little Chef restaurants closed. They still had all their furniture remaining for a while, but it was later removed and the buildings were boarded up.

In around 2005, a broken water pipe had caused the kitchen of the northbound restaurant to flood. By this point the buildings had fallen into disrepair with broken windows, a messy interior and a collapsing ceiling.

In the mid-2000s, the shop buildings (which were once full of broken junk after the services had closed) were demolished but the Little Chefs were left untouched.

As of 2017, nothing has ever come of Kentford however both buildings are up for sale through Ashwell Rogerswebsite. The car parks remain visible but are extremely overgrown, and the slip roads fenced off.

Incredibly, the site is still listed as a service area in the 2020 Ordnance Survey maps.

Immediately to the south of Kentford services is the old road, Bury Road. This had the original Kentford branch of Little Chef which opened in the late 1960s and closed a few years later, when the bypass opened.