An offline service area is one that is not immediately adjacent to the road it is serving, so motorists have to negotiate a junction in order to access it. This design became very common in the late 1980s and 1990s and continues to be seen in proposals today. 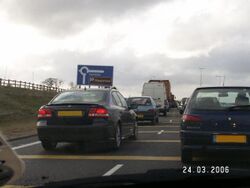 Queues at the exit for Cherwell Valley services. It was a badly designed junction, partly because it was designed around the service area.

For most people, services located at junctions will be associated with complicated and overloaded roundabout arrangements which, on a bad day, can turn a brief stop into a long detour.

When the first motorways opened, the Ministry of Transport never ruled out the option of building services at a junction, but rarely considered it because they were nervous about adding traffic to the motorway junctions. They also made a point that as most motorway roundabouts were built above the motorway, to bring a service station up to that level would require a significant investment (at the time, the Ministry paid for all the roads within service stations).

At Aust and Scratchwood there were simply no other suitable locations, so those services were allowed to be built at junctions. Gordano and Exeter soon joined this category, but all other services were built in the conventional online style. 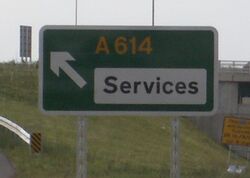 There is a theory that compiling a service area with a junction is safer. It's definitely less destructive.

By the 1980s, highway engineering policy began to place less emphasis on traffic flow and more on environmental considerations. Local authorities became more influential and they wanted services to be small and ideally part of the existing urban area. In addition, many operators had highlighted the point that they preferred services at junctions because they were cheaper to build and run, meaning they would be paying more rent. This was underlined by the Prior Report of 1978.

There was also a theory that offline services were safer. What makes new roads safe is that they have very few exits. Building new exits creates new safety risks that will be avoided if you merely build the service area at an existing junction. That theory is true, until the existing junction becomes dangerously overloaded.

The opening of the M25 was a turning point for this. In the years leading up to the M25, the Department for Transport had struggled to generate interest in new services. The completion of the M25 was rushed, and it and the surrounding roads needed new services urgently. To avoid battles over green belt land and complicated studies in to how new services would affect traffic flow, almost every service area built during this period was built at a junction. The busier the junction, the better: operators were less hesitant if they knew they'd get a lot of trade.

It was during this period that South Mimms, Birchanger Green and Thurrock were designed, three of the most controversial services in terms of traffic congestion. This revealed the same-side multiplier effect for service areas which are too hard to get to.

This became even more common after 1992, when services became privately planned. Developers almost exclusively considered junction sites because they were much cheaper to build and easier to manage. That's because everything only has to be built once, and you don't get the situation where one side is busy while the other side is quiet. Junction sites are also more likely (but not guaranteed) to be closer to existing development, making it easier to connect the electricity, water and waste services, and easier to get through the planning process - some new service areas were tied into new business parks or industrial estates, meaning it was already accepted that something was going to be built there.

Developers would sweeten the deal by paying for minor improvements to the junction, which would win over cash-strapped councils. This is known in the trade as a "Section 106".

In 2008, the Highways Agency put a stop to this, by saying no more services should be built at junctions unless there is no other option available. They also clarified that they were paying attention to large developments selling fuel and refreshments close to motorways.

In 2013, under pressure to reduce their grip on the industry, they scaled this back and simply said that if there were two otherwise identical proposals, they would prefer the online option. However, there is nothing to force the offline option to be rejected. The new wording also described an offline service area as one "sharing a common boundary with the highway", implying that any new proposals for sites not directly alongside the motorway would not be allowed to be signed.

Since 2017, all of the major operators have started proposing new offline services. Some have been approved and others rejected.

Burtonwood and Northampton can both be regarded as offline services, but they started out as online ones: they had a motorway junction built around them.

There is a third design which falls into neither category, where the services take the design of an offline service area but are accessed via their own junction. This is an expensive attempt to get the best of both, with Cobham being the most well-known. 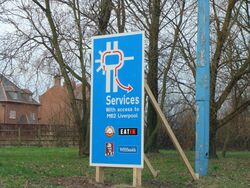 A sign explaining how to get around the junction to Burtonwood.

This section lists motorway services only.

Official government-owned services are always of the online type, while private companies can't apply to have a motorway serve their own facility. Instead they can built their own facility at an existing motorway junction, and this gets signposted as a tourist attraction. 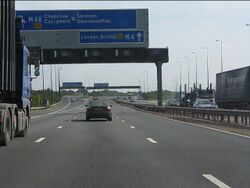 The sign at the exit for Severn View doesn't tell you it's another 9.7 miles away.

Having to do a long drive from the motorway to the service area itself is a common complaint from road users.

Below we have listed some of the worst offenders. There will be more service stations which may be frustrating to get to, but don't out-rank these in any category. You can tap the 'sort' buttons to find the worst offender in each category.

In some respects this list is slightly unfair. A high mileage isn't so bad if it's on a fast road, like with Severn View or Lymm. Likewise traffic lights aren't a problem if they're all green. What really matters is journey time, but that's way too variable to record here.