Roadchef's half of the split services, for southbound traffic. The service area is a bit more modern than its northbound counterpart, and it's bigger too.

Prices are paid using NexusPay or in the shop. The location code is 2212. 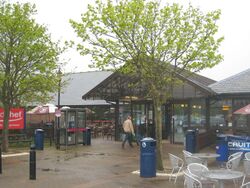 When the M5 opened in the 1970s, the Department for the Environment weren't sure how they were going to strike the balance between building enough services for people to be able to rest, and building too many services meaning they wouldn't be very profitable. This was especially problematic in Somerset, where the M5 was expected to be much busier in summer than in winter.

To get around this, the site identified for a potential service area at Sedgemoor opened with only a car park and toilets. It was named Brent Knoll picnic area, and it was spaciously arranged so that it could one day be turned into a full service area.

The barren car park led to concerns from users about crime. Inspectors said the toilets were "full of vandalism". Roadchef (the owners of the next service area to the south) were soon invited to set up temporary catering facilities on the southbound side. They promoted this as their Brent Knoll branch.

In 1986, Brent Knoll was upgraded to become the full Sedgemoor services that's here today, with a narrow HGV parking area and an Esso petrol station.

The main building took a horseshoe shape, and had four doors along the front: the main entrance, a takeaway unit, an AA and RAC office, and a tourist information centre. Inside the main entrance was a short corridor, with the Orchard's Restaurant on the left. The shop (branded RoadShop) was on the right, with a conference room behind it. The toilets and game arcade were at the back. The toilets and corridor formed one end of the horseshoe, with offices at the other. An outdoor dining area sat in the middle.

A plan to build a RoadChef Lodge on land to the far north of the site was approved in 1988 but not implemented. The hotel was proposed again in 1995.

In 1990, a conservatory was erected in the middle of the horseshoe area.

The shop gained more space when the takeaway unit and breakdown units closed. The far end of the shop became Wimpy in 1995. Roadchef had looked at moving Wimpy and Costa to the conservatory area, making space for Dr Beak's Chicken, but they ruled this out.

The small HGV parking area was expanded in 1998.

In around 2001 the tourist information centre closed and moved to a new building outside, making more space for the shop. In about 2005 a new Costa was built in an extended area at the front of the building. The restaurant has been Foodfayre, onRoute and Restbite, while the shop went on to become reStore, and then WHSmith. In 2010 Wimpy became The Burger Company.

The very variable traffic flow through here has caused a number of temporary takeaway units to position themselves outside the main entrance. These have included Costa, Lovington's, Carte D'Or and Pasty Presto. The former Carte D'Or kiosk is due to be refurbished in 2021 and reopen as a Dolcetti Ice Cream kiosk.

Major changes took place in late 2015. The dining area was given a large extension, totally changing its appearance. The entrance was moved to the new dining area, and customers would have to snake around the seating before returning to the original corridor. The old Costa became McDonald's and the old Burger Company became Game On. 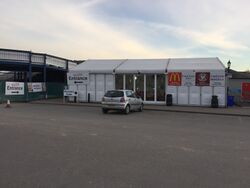 The temporary arrangements during the refurbishment.

The plan was that the new dining area would have Hot Food Co and Costa, but instead the former consisted of a Fresh Food Cafe and Chozen Noodle unit. A larger than expected extension was provided with a new SPAR shop and Fonebitz all opening in early 2016. During the building work, a temporary seating area was placed at the front of the former entrance to the services in the form of a gazebo tent.

A Costa Drive Thru opened in June 2018, built on the main road opposite the car park. Some of the signs which were removed to create this were original to the service area's construction.