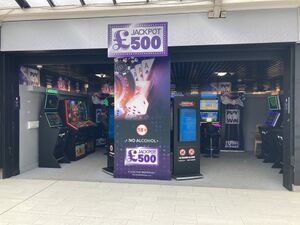 Many more photos in the gallery
Official Website:
www.roadchef.com/jackpot-500

The first Game On logo.

Jackpot £500 is the branding currently used by Roadchef's video games and gambling facilities.

It is used at the majority of their service areas and is thought to be highly profitable, mainly among lorry drivers taking a legal rest break.

Jackpot £500 can be found at most Roadchef service areas:

Game on used to be found at the following service areas: