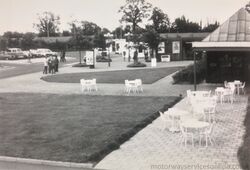 Although you might not think it now, Leigh Delamere was part of an era of service station design where the emphasis was on making it a pleasant place to visit. Even today, it stands out for its large grounds and buildings.

The plan was for the service area to slot in between Pucklechurch to the west, and an undetermined site to the east: possibly Wootton Bassett, or one east of Swindon.

The site was opened to bids in 1969. Mobil were allowed to bid for the service area despite owning nearby Michaelwood, as not much traffic was expected to take that route. In the event bids were received from Esso, Fortes, and Granada.

Granada had submitted a poor design but with a good financial offer that they hoped would push the others out the picture. When this was rejected, they hinted that they wouldn't cooperate with the planned Kempshott services and possibly not bid for any others. Esso won, and they later announced that they would be using the brand name 'Taverna'.

When the M4 was under construction, land was extracted from here. When it was filled in, it was reported that two diggers were buried.

When Taverna opened Leigh Delamere in 1972 (the contract was dated 14 March), it was praised for its simple but striking building design; the antidote to the crowded and complicated services built so far. At 41 acres, when it opened it was considered massive - 10 years ago services had been only eight acres in total size.

Taverna were slightly scarred by their poor experience with Washington, but even so they wanted to make Leigh Delamere exciting. A last-minute change in company policy caused the opening to be delayed and a second trial of microwave catering to be used. It most sold basic meals, but with a limited number of "peripheral items" for more advanced tastes.

The restaurant had orange settees and was divided into two, keeping private vehicles and lorry drivers separate. Outside was a large landscaped area.

Thanks to their good design work, in 1975 Leigh Delamere was the only service station to impress a panel of architects, who called it "extremely fine, large and spacious". A trial children's play area had been sanctioned by the Department for Transport, occupying a cut-off quadrant in the northern corner.

A landfill site was positioned right next to the service area from opening. It eventually closed in 1976 because it had reached full capacity, despite Granada campaigning for it to close sooner. They claimed it was causing them a major infestation problem.

In 1986 it was noted that the weekly patronage varied from 16,000 to 129,000 during the year, and employees varied from 200 to 300. This makes it approximately four times bigger than Ferrybridge services, which was surveyed at the same time.

The eastbound hotel here opened in 1988, and westbound in the early 2000s built over a children's play area. The eastbound play area was replaced by coach parking.

Granada were given permission to change Leigh Delamere's name to "Chippenham" in June 1996. They thought a more generic name would attract more custom. The proposal was abandoned due to the cost and poor reaction, although the new name was used in some of their publicity.

Part of the car park was leased to a pallet business which traded until the 1990s. The Highways Agency were not impressed by Granada's behaviour. 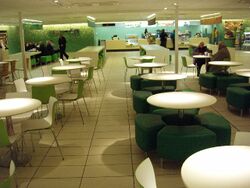 The exclusive Fork In The Road restaurant.

Leigh Delamere used to be one of three services to offer a Barber Shop, the other ones being Lymm on the M6 and Toddington on the M1. It was replaced by a Greggs outlet in March 2015.

The westbound services used to have an AJ's. This became a Little Chef, along with a new restaurant on the eastbound side, after Granada acquired the brand in 1996.

Under Granada, the westbound side was extended to gain a BHS Express, Tandy, Halfords, Claire's Accessories and an Early Learning Centre. Under Moto, only BHS were kept. They instead introduced Birthdays and Scoop stores, as well as T2, Thorntons, The Sock Shop and a Formula One shop to both sides, the latter being a huge shop which sold a small amount of Ferrari merchandise.

The eastbound side had a Web Shop and The Body Shop. Two units at the back remain closed, while one has become a Greggs (unusually far from the car park). A "continental style" coffee lounge was opened in 1995, aimed at business drivers who would be claiming the cost back on expenses.

A BT "communications room" was added outside the westbound building in around 2000. It is essentially a summerhouse-shaped room with public telephones mounted to the walls. Whilst it is one of BT's more unusual public phone experiments, it was only one of two in UK service stations and is no longer here. Around this time, BT also provided a workspace in the westbound services, designed to attract passing business people with contemporary perks of the time such as a phone and internet connection.

Motorpoint trialled e-showrooms here between 2000 and 2001. Cars were displayed outside the service area, and customers were directed inside where free access to the Motorpoint website was made available. The trial cost Motorpoint £10,000, and was described as "unfeasible".

In around 2001 a drive thru Burger King was added to the service area. Although it has since closed (presumably because it directed trade away from the main building), the set-up can still be seen on the westbound side.

The country's first service station WHSmith shop opened here in November 2006, along with the eastbound M&S Simply Food store. The restaurant's name was changed to Fork In The Road, and the two Little Chefs were removed around this time.

The presence of a Truckers Lounge on each side earned Leigh Delamere a place in the Highways Agency's 2006 truckstop guide. The entry was removed in around 2009.

The westbound unbranded restaurant and Caffè Ritazza units became Costa in round 2008. Fork In The Road and Upper Crust became EDC and Costa respectively.

In 2011, the eastbound side gained the first ever Domino's Pizza outlet, in what was billed as the start of a full roll-out. This never happened, and the outlet was removed in January 2012. There were then plans for the former EDC serving area and kitchen to be replaced with a KFC in 2016. An internal children’s play area and extra seating filled this space instead.