The two buildings at Clacket Lane were designed to form a gateway to Kent and Surrey, who's border it sits on. The westbound side, once the first services for traffic coming up the newly-formed M20, was also a gateway to England, with a traditional English design trying to mimic a courtyard. Some of that styling was applied to the eastbound side, such as the brick wall around the building.

This is the history of Clacket Lane. 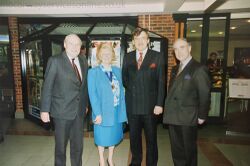 The site of Clacket Lane was chosen from around five possible locations on this part of the M25. It was held as a back-up site from 1971, with Chevening being the preferred site but confirmed as being unusable in 1976.

Between J5 and J6 (known as the 'Titsey Woods' option), three individual sites were being repeatedly assessed. For ease of identification, those three were named Titsey Woods, Clacket Lane and Brasted - Clacket Lane being literally named after the adjoining the street. That option was chosen and the unusual name stuck - specifically with that spelling, even though the lane itself tended to be spelled differently.

The decision to change the name from Titsey Woods to Clacket Lane was to identify the three options and not, as some websites have suggested, because there were fears 'Titsey services' wouldn't be taken seriously. In each amenity building there is a large cabinet titled 'The History of Titsey Woods', which has several Roman artefacts which were discovered whilst the service area was constructed.

The Department's change from pursuing Chevening to the reserve site at Clacket Lane caused the Daily Mail to claim Clacket Lane services had been planned in secrecy.

In March 1977, the design of the road bridge at Clacket Lane was modified to make space for the future service area. This was a feature of the M25 when it opened here in 1979.

Roadchef later said that they were unhappy with the name Clacket Lane, and that they would rather call it 'Sevenoaks'. It soon became an important landmark on the M25.

In 1983, the Department of Transport reviewed its policy for new service areas on the M25.

This considered a long list of possible sites, including an unusual one that would have been attached to the eastern side of the M23 interchange and the possibility of bringing back the Chevening plan. Four options were shortlisted: Clacket Lane, Titsey Wood, Park Wood and Godstone. The Godstone site was positioned at M25 J6, and later promoted by Esso.

The Clacket Lane plan again came out top - it was in a good position for traffic and well-screened by trees. Clacket Lane continued to be strongly opposed locally. The Campaign Against Titsey Service Area (CATSA) argued no service areas should be built in this area at all.

The Department of Transport began a second Compulsory Purchase Order in order to acquire trees to the north of the site, to ensure they could be used as landscaping, but residents argued this was an inappropriate use of power. To tackle the mounting complaints, the Department of Transport made an unusual commitment to avoid expanding Clacket Lane. This commitment, which was probably informal at best, would have been long forgotten when the building opened, and especially once it was sold.

Plans moved forward in 1986, but the decision was subsequently taken to the High Court by objectors. The High Court raised issues with the Department of Transport's leasing procedures, which meant that many other planned service areas had to be put on hold.

Tender documents were finally issued in February 1991. As it was one of the last service areas to go through this Department of Transport process, it was also one of the most detailed. The successful developer was required to lease space within the building to a tourist information centre, and to provide a rear access. The westbound side needed to have 97 toilets, and parking spaces for 400 cars, 74 lorries, 15 coaches and 3 caravans. The eastbound side could be marginally smaller, with 92 toilets and parking for 350 cars, 72 lorries, 15 coaches and 3 caravans. A 2000 square metre picnic area was required on each side.

Roadchef won the contract and spent £35m developing the service area. The building looked much like the supermarket design at the time, with one newspaper calling it "a toned-down, Tesco-style bungalow". There was a burger bar called Route 25, the café Cafe Continental, a truck driver's café at the end of each building called Juggernauts and a sculptured water fountain, designed by William Pye and named 'Flyover'. A press release called the sculpture "the first major sculpture for a British motorway service area". It was dismantled in around 2008. The tourist information office had a large promotion for the Sally Line ferry service.

Roadchef's 10th motorway site officially opened on 21 July 1993, with Robert Key MP, Minister for Roads and Traffic in attendance along with Cecilia Gerrard, Chairman of Surrey County Council. It had initially been announced that the Secretary of State for Transport, John MacGregor would open the service area, but this was later changed. 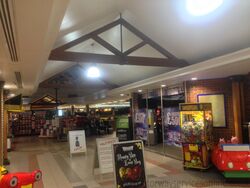 Looking down the corridor to the refurbished seating area.

The services were the first Roadchef site to introduce the 'Engenie Electric Car Charging Points'. These later changed to Ecotricity charging points.

The filling stations rebranded to Total in the late 1990s following the merger of Elf with Fina. They were both later sold to Shell in early 2012 following their nationwide shutdown before Shell passed them to BP in September 2013.

The Bread Kitchen was trialled here in 2012.

As with all Roadchef services, the inside used to have a long corridor design. Much of this is retained at the back, but in 2012 a McDonald's was introduced with a large seating area that crossed the main corridor, and a much smaller servery.

A Carvery Express kiosk was trialled on the eastbound side here alongside Watford Gap northbound in 2016 but both were removed in 2017.

A Spar was trialled here in the forecourt in 2003, before being introduced again in 2016 to the amenity building. Pret a Manger opened here on 16 March 2018. The Pret a Manger store then later closed in early 2020 to make way for a new Leon restaurant.

The hotel here included a Regus Express meeting room for a time. This was later removed in 2019.

The eastbound forecourt was the subject of a protest on 28 April 2022, during which it was vandalised. Further vandalism caused both forecourts to close on 24 August 2022.

Use with care. Outdated surveys have been included for interest only.

The 2022 Transport Focus survey calculated a 95% satisfaction score for both sides of the services, placing it in the top quarter.

In Spring 2021, Which? Magazine placed Clacket Lane in the middle of the table, with a 51% customer satisfaction score.

In 2015, the services were rated 4 stars by VisitEngland.

Lord Adonis (Secretary of State for Transport) said he was "very impressed" by the services when he made a surprise visit in September 2009, saying it was clean and provided a good meal.

The services were said to be well supervised with a good range of items in the shop and restaurant. The food wasn't tasty though, it had no picnic benches or indoor play area, it was very expensive and it was described as dirty, with the fold-away baby changing tables being described as "hazardous to health".

The services were also inspected by The AA on 3 and 4 April 2004. These are their results:

A 1995 review in The Independent gave the services three stars.