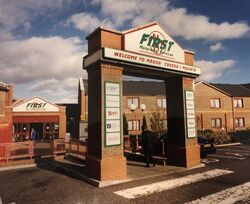 As with all of Wales's motorway service areas, Magor was developed privately. It has since been passed between several operators.

In 1988, Whitbread and BP worked on a joint application to build a service area near here, which appeared to be to the south of the M4. This was rivalled by a joint application from Granada and Esso which was approved in 1990, despite opposition from the local MP, and was built.

The position of the service area was chosen because Top Rank's nearby Severn View was about to lose most of its trade as the Second Severn Crossing would divert traffic away from it.

The service area opened on 8 April 1992. Ruth Madoc of the TV series 'Hi-Di-Hi' served breakfast, promoting the site and Granada's new uniform. At the time it was positioned at M4 J23; the exit is now called J23A.

When they tried to purchase Pavilion, Granada were set to gain four service areas in a row. As a result they were instructed to sell Magor and Severn View, and a management buyout saw Magor change owners to First.

When they owned it, First used the slogan "trying that little bit harder". Given their reputation, you would wonder whether they were trying enough.

In October 2008 First were acquired by Moto, meaning that this should have become a Moto service area, however the deal fell through. Esso bought the petrol station the following year.

After First remained quiet for a while, in August 2011 they sold the main service area to Roadchef.

The petrol station was sold to Rontec in 2014. It had an On the Run store, then a Shop'N Drive store, and then it was rebranded to Spar in 2017. It used to have Rontec's only "Stop 'n Eat" counter, which was a Rontec own-brand serving hot food. It then changed fuel brand in summer 2018 from Esso to BP.

Because the filling station is under different ownership to the main amenity building, there is a history of the two opposing each others' developments. In 2009, First argued that if Esso got the expansion they wanted, First would be forced to surrender their 24 hour opening obligation and make staff redundant as a result.

Meanwhile, as of 2021, internal documents still refer to First as the owner of the main building. 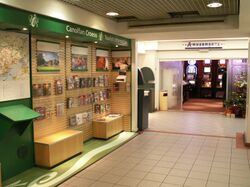 The original corridors around the building.

Until Roadchef took over, the service area was laid out with an unusual set-up where the restaurant servery was in the centre of the building. However, the enclosed nature of the building and all the dividing walls meant the layout wasn't obvious, and it felt like a myriad of corridors with many dining options.

Its design was very unusual for Granada, but it opened around the same time as Thurrock, which was also an experimental design. It also had an area at the front which was similar to their usual courtyards, and the hotel was placed on top of the main building.

Granada added a Burger King in 1996, which became Wendy's later in the year. There was also a hotel, most likely opened as Granada Lodge, which became First Lodge under their new owners. It soon became a Travelodge franchise. At the far end of the building was a tourist information centre, which is now leased as a shop unit.

First later changed the Wendy's back to Burger King, and branded the coffee bar as Coffee Republic.

When Roadchef took over, they moved the restaurant area, in doing so changing the layout. There is now a single corridor from the entrance which leads to a variety of units at the centre of the building.

They set up a new Restbite (originally it was going to be Hot Food Co.) restaurant, but didn't apply any of its branding as they intended to invest in a new Fresh Food Cafe if the sales figures allowed for it.

The restaurant area also gained The Burger Company, which in March 2012 became McDonald's. The unbranded shop became WHSmith. The aim was to expand the tourist information facilities to make the service area a gateway to Wales.

The additional shopping unit became Cotton Traders, but that closed and remained empty. It was eventually re-utilised by 'Motorway Phone Gadgets' in early 2022.

The internal layout was reconfigured again in early 2019, with the Restbite restaurant being removed to become additional seating and the Chozen Noodle unit converted to a hybrid concept serving breakfasts in the morning under Roadchef's latest The Breakfast Kitchen brand and Chozen Noodle products from 11am. External kiosks have also been added to the front of the amenity building, with one trading as Costa and the other hosting Phat Pasty Co. in 2021 and New York Bakery more recently in 2022.

Works to expand the car and HGV parking areas commenced in summer 2022, utilising spare land that has been kept clear since the site was built. These works will also include a new EV charging hub being added to the existing car park, adding 6 new chargers. These works are expected to be completed in late 2022.

In 1991, whilst the service area was under construction, the Welsh Office announced plans to divert the M4 to the south of Newport. This idea has been cancelled and resurrected several times since.

The proposed new arrangement which was published in 2013 left the service area more than two miles from the nearest M4 junction. Roadchef published a detailed objection to this, breaking down their sales figures and arguing they would lose 80% of it. In doing so, they effectively threatened to close the services if this plan went ahead.

Roadchef also revealed that they were holding off a significant expansion to the service area until its future was clear, and asked customers to support their campaign to "Save Magor".

From a business perspective, creating as big an objection as possible would likely increase the compensation offered. However as an employer Roadchef also had a duty to protect their staff, who would have been made redundant if the service area had closed.

The M4 bypass project was cancelled again in June 2019. Roadchef responded a few months later with a plan to expand the parking areas.

The 2022 Transport Focus survey calculated a 94% satisfaction score for the service area, placing it firmly in the middle.

In 2021, Which? Magazine ranked Magor 50th out of the 68 service areas they visited.

In April 2007, the members of Vans United voted Magor as the worst service station in Britain.

The services were said to be well signed with sufficient parking spaces, but there was a lack of disabled access, high prices and poor hygiene.

In 2006 Magor came near the bottom of Holiday Which?'s survey, having provided them with a "truly miserable experience". The poor food and "tasteless shop" were criticised too, and Which? pointed out there was a sign forbidding customers from bringing their own food.

In 2001 the services came top in an AA survey, who rated it "acceptable". They were still critical of its cleanliness.

In 2000 critic Egon Ronay praised the catering at these services, having criticised just about every other service area.