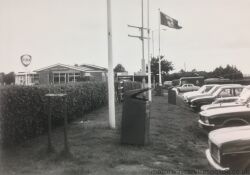 Strensham is one of the oldest services in the country: its position was being planned long before Watford Gap had actually opened. That may well be why the original Strensham services showed amateur errors throughout by the Ministry of Transport.

The location of the services was deliberately chosen so it could cater for the M50, which had plans for its own service area dropped. 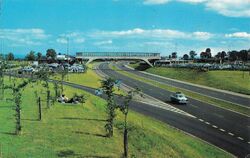 The small services upon opening, with the distinctive bridge.

The tendering for Strensham was delayed to allow everybody to learn lessons from the first two services. However, they were also running late, and Strensham couldn't be left long enough to gather any meaningful data.

Blue Boar did in fact bid for Strensham themselves, but the strain of running Watford Gap had caused them to restrict their design and financial offer.

The site was 11 acres in size and a minimum of 12 toilets were required by the tenderer, which was later described as "hopelessly inadequate". The forecourt needed a minimum of 12 pumps across two brands, but Kenning went for 20 pumps and five brands.

"Kennings are certainly making a big effort."
Ministry of Transport, 1963.

The design consisted of a small café on each side of a covered footbridge, close to the motorway, with a larger restaurant on the northbound side. They then applied pleasant landscaping to the design, and mirrored it in a number of applications across the country, such as at Keele.

The footbridge between the two sides was designed to stand out, creating a distinctive landmark to identify the services by. The Royal Fine Art Commission objected to such a design. A debate over the layout of the maintenance compound caused further delays.

The building's walls were brick with straw thatching. The two restaurants were simply furnished, the main one being advertised as open the very precise hours of 09:15-20:55. It had blue plastic seats, a carpet and curtains.

The café had a tiled floor with red and blue tables and high-backed settees. Kenning used the name Signpost Coffee House & Grill. A restaurant seating 100 was built on a terrace so advantage could be taken of the "attractive scenery" surrounding the area. It had a small entrance hall where the toilets were.

Work was accelerated and the transport café and forecourt were able to open on 20 July 1962, with the restaurant opening on 16 August 1962. Pictures of the building were used on postcards and adverts. 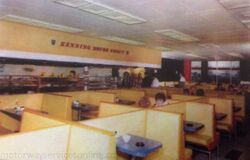 Upon opening it was criticised for being "driven by economy" and for spending all its money on the bridge. The buildings appeared "poor" and did not tie together; the architects were also criticised. One inspector notes the café was usually empty but about to be extended - it may have had a very variable flow.

Upon opening, Kenning were already getting cold feet on the idea and couldn't see the investment paying off. They had to be encouraged to keep it going, and continued to invest heavily in it.

By 1963 an extension was required, but the restaurant was losing money and the café was having its opening hours reduced.

A more frank 1975 review described the layout of the services as "disastrous", with "low quality" buildings, a confusing car park and a footpath which sent pedestrians through the forecourt. It urged the services to be redesigned from scratch, which did eventually happen.

The tiny footprint allocated to the services and small buildings sat within them meant that as customer expectations kept changing, the services struggled to do anything about it, choosing to stick with its grill-restaurant. By the 1980s, a second storey had been added to the amenity buildings, but they were still too cramped.

In 1977 Egon Ronay rated the restaurant as "acceptable" and the café as "poor". One meal he highlighted was a soup which came "straight from the packet" and was still "carelessly cooked".

In 1991 the services were thought to be one of the worst in Britain with staff morale at an all-time low. A Which? survey told motorists to avoid the services because of its drab restaurant, small car parks and poor toilets. Coincidentally, this was the year things changed.

The problem with Strensham became clear. With no other services open at the time, Kenning had to plan with no idea how many people would be stopping by or what sort of catering they wanted.

The Ministry of Transport had allocated too small a space, and had approved what proved to be a sub-standard design. They were also suffering from inexperience as the M5's capacity quickly proved to be insufficient.

Most old motorway services have struggled to keep up with the increase in traffic flows, but Strensham would be the first to change beyond all recognition. 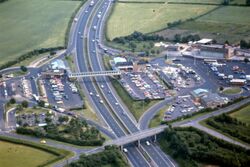 By the 1980s the amenity buildings had grown considerably, but were still constrained.

The Take A Break logo.

The 1990s was a period of change for Strensham from the worn-out place it was into something more manageable.

Firstly, a new café was opened, called Milestone. Kenning fell under new management in 1992, who felt that their one motorway service area didn't fit the rest of the business, so Strensham was put up for sale in April 1994. Pavilion were interested, but a management buyout saw Take A Break take over in July.

Family-run Take A Break had a favourable reputation, but were taken over by Roadchef in 1998. They had a red-and-yellow colour scheme with sections of the services marked 'Take A Bite', 'Take A Burger', 'Take A Pick', 'Take A Rest' and 'Take A Chance'.

In 1991, the M5 past Strensham was widened and J8 was improved, which brought it even closer to the service area. This work was used as a chance to close Strensham northbound and build a new site a mile further north. Strensham southbound was kept and tied into the new roundabout.

The old northbound services became a works depot, with direct access from the new roundabout only. An auxiliary lane was built between the improved junction and the new service area, and Strensham became the only service area in the country with its own dedicated lane from the motorway, a claim to fame that was unique until 2017.

The new northbound service area was built to cater for typical traffic patterns until 2015, which it broadly did, with the first significant extension opening in June 2015. The petrol station was the largest in Europe when it opened, with 32 pumps. The hotel was added in 1995. 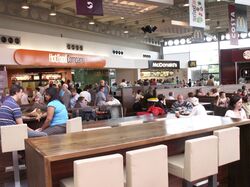 The new collection of southbound brands.

The southbound petrol station moved to a larger site by the exit. The old petrol station, and the transport café positioned next to it, were demolished to create coach parking.

In 1999, the southbound amenity building had a small set of steps covered by a glass roof, with three new retail units (an old game arcade) on the right in a foyer. Through the doors into the main building, there were toilets on the immediate left and larger, older shop was then in the right-back corner, with amusement arcades straight ahead. Turning left was the servery, up the steps, with the kitchen on the left and seating all around it.

Roadchef had added a Cafe Continental to the foyer, and a Wimpy to the restaurant. They were looking at introducing a Costa and Wimpy Chicken, but they reported that Strensham southbound "under-performs significantly" and came up with a bigger plan instead.

In 2002 Roadchef demolished this building and replaced it with a new, airy, glass, cuboid building, a common design from them at the time. The new building was in the site of the old car park and vice-versa.

The original plan for the new southbound services included a mini-roundabout at the entrance to the car park, but this was changed as it would involve traffic coming up the slip road to give way to people leaving the car park, potentially causing queues back on to the motorway. Instead in 2015 the layout was changed to have two lanes enter the car park and run parallel, a very unusual setup.

In 2005 there were plans to build a hotel at the northern edge of the southbound services, but this was rejected, partially because the services were already struggling to keep up with demand. Instead, the area was used as an overflow car park, trying to squeeze as much capacity out of what's available as possible.

The acquisition was a wise one, as it went on to become Roadchef's busiest and most profitable site. In 2010, a traffic count revealed the southbound services were significantly busier than the northbound ones, attracting approximately 3% more traffic. This probably followed the 2008 refurbishment, which cost £1.6million.

Despite the reconstruction of the service station, several reconfigurations of the car park and the reconstruction of the M5 itself, there is one single streetlight, positioned at the slip road leaving the M5 southbound, which dates back to 1962. It is on Roadchef's land but positioned far enough away to be forgotten about (and would probably require a road closure to maintain it). This makes it a good contender for the longest-surviving, unchanged, feature of Britain's motorway network.

Owing to its high trade, Strensham has been a popular site for Roadchef to experiment with new layouts.

In 2003, a Costa Drive Thru was trialled on the northbound side claiming to be the 'first drive thru providing just coffee'.

In 2008, a £1.6million investment in the southbound services saw McDonald's, WHSmith, Hot Food Co and the locally-based Soho Coffee Co trialled here, the first two of which were rolled out nationwide. As well as snacks, Soho Coffee had a salad bar and a grill, and in July 2012 it opened on the northbound side too.

In 2016, the trial brand arrangement was moved around for the first time. Hot Food Company became a large Fresh Food Café. However, Soho Coffee was removed from both sides.

On the northbound side, an extension allowed for a trial of Spar. It also held on to a Pizza Hut Express long after the others had been removed from the motorway network, lasting until 2014.

Another large refurbishment took place in the southbound side in 2017. Valued at £5 million, this included the opening of a Leon restaurant in August, and then in March 2018 a new Spar shop with Dolcetti Ice Cream counter opened. Shortly afterwards a flagship Boots store opened, while McDonald's and Costa were refurbished.

The northbound petrol station was operated directly by Roadchef, but it was sold to Euro Garages in early 2018. Even under Roadchef ownership, it was unusual in that it advertised a Roadchef-operated Subway and JJ Beano's, with fuel provided under the Texaco and Star Market names. With Euro Garages it is now branded BP, with the Subway and a Spar that competes with the one in the main shop. Following the coronavirus lockdown in 2020, the Subway store permanently closed.

In January 2020, the Boots store here closed following an unsuccessful return to the motorway network. This was replaced by Prezzybox, with what is their only physical store.

The services in the floods.

During the floods of July 2007 the M5 here was completely unusable, and just about every building in the services was used as a depot for stranded motorists. The manager at the time, Quintin Speers, was hailed a hero for working almost non-stop over several days to make sure that people stuck both in the water and the resulting queues were well-informed and safe.

The services were the subject of a fly-on-the-wall documentary called 'Motorway Madness', which aired in October 2010 on Five.