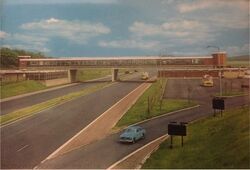 One of the country's oldest services, Keele led an experiment with a bold new design. Its full history is included below.

Being close to Keele University, the Rear Access here has reportedly been one of the most abused. In 1977, Keele was the first service area to try to stop this with an expensive rising bollard set up, but it didn't work.

Keele was the first of the three to have its contract opened to tenders. The land used was shaped by the four fields used to build the service area. It had been hoped that Keele could wait long enough to collect feedback from Watford Gap and Newport Pagnell, but the priority was to have it open with the motorway, so everybody involved had to assume that the previous examples were working well.

Before opening, the Minister had discovered a liking for bridge-restaurants and wanted to encourage them.

The minimum investment allowed in the project was £75,000. 62 companies were invited to tender and four replies were received. They were then analysed by their rent offer, fuel offer, catering offer, traffic flow, landscaping and company stability.

This local firm were a subsidiary of BET Investments, who had bid for Newport Pagnell.

Their design was discounted because of its poor financial offer, but their catering proposal was very good. However, their plans showed inexperience, and the kitchen set up was poor.

The Gatwick caterers who never managed to assure the Ministry of their competence struck again. This design had a footbridge with two buildings set far back from the motorway.

Their catering plans did not stand up to scrutiny, being described as "unsuitable", despite the company's experience. Their traffic flow was described as "practically unworkable", and their building design was "entirely negative and uninteresting" as well as "difficult to operate".

Airborne also explained they would be choosing a brand name to operate under if they won the contract.

The operators of Strensham made a bid for Keele, using the same architect. Their design was discounted because of its poor financial offer.

"An imaginative addition to the appearance of a 20th century motorway."
Ministry of Transport, 1961

The Fortes/Blue Star combination had applied for every service area to tender so far, and this time they made two applications: one with a bridge and one without.

Their first design had two single-storey buildings at either end of a bridge-restaurant, with a £250,000 investment. This was described as "a tasteful design" and was "met with enthusiasm". The Ministry felt this would be a good place to experiment, as the previous service areas on the M1 had been criticised for being unimaginative. There were some doubts about possible legal issues with the bridge, and it may have to be removed from the plan. The Ministry later agreed to pay £9,360 for the deck of the bridge, with them leasing out the structure.

The bridge-restaurant originally had tables set in small booths with sections of glass in between. It was distinguished by water towers at each end of the bridge, a design later used again at Charnock Richard. The architect for both Keele and Charnock Richard was Terence Verity.

Their second option had two two-storey catering buildings with a restaurant at either end of a footbridge, which was a cheaper option to construct. Fortes sold it as "an improved Newport Pagnell". Both designs were let down by a poor car park layout.

Motorway Services Ltd's first bid won the contract in 1961, with the Ministry saying the design was inspired by what was popular in the USA and Italy. The cost of the development was later quoted as £500,000, but it's not clear how much of the project was included in that figure. Keele had some of the most expensive land out of the earliest service areas. 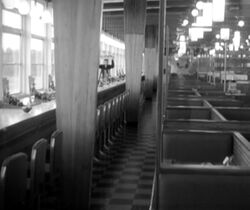 Inside the bridge-restaurant, before it opened.

Having won the contract by impressing the Ministry with their ideas, Fortes quickly found themselves in hot water for the poor detail in their design work. Fortes missed out on several subsequent service station contracts over the next five years as a result.

A delay in construction meant the Staffordshire section of the M6 (including the services) was ready to open before the Cheshire section. This would have seen the motorway come to an end at the boundary, just north of the services. Fortes had to opening the services even though this part of the M6 was a dead-end.

In the event this didn't happen: the M6 opened to J16 in 1962, but Keele opened on the day the M6 was extended to J20, 15 November 1963. A film celebrating the opening of the motorway praised Keele for its "varied and reasonably priced menu" and "relaxing surroundings", saying it would "cater for every motorway user".

In its time, Keele has been painted bare brown, grey, Welcome Break blue, KFC red, Coffee Primo orange, white, Welcome Break black, and no doubt many other colours. In the 1990s there was an attempt to turn it into a giant advertising billboard, but this was rejected by the authorities on the grounds it would be distracting and dangerous to update. 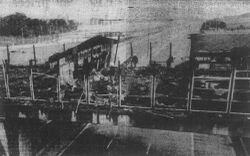 The wrecked building above the motorway.

In 1964, Keele was described as being "in the red". The main café turned out to be the most popular facility, especially with northbound traffic.

Within a few years, Fortes moved the transport café to the bridge and the old transport café became a weekend overflow café. Vending machines were placed outside the entrances, and ice cream vans operated in the car park, to the disapproval of the Ministry. Escalators were installed to encourage customers to use the grill and griddle, and to reduce congestion.

The car parks were changed too. The overflow car park was removed, and the area was used by HGVs instead. The wording was modernised, with "commercial" and "private" changed to "lorries" and "cars".

On 3 August 1974 the entire building was closed while staff staged a strike.

In 1977, Egon Ronay rated the services as "appalling", commenting on the deserted restaurants by saying the public had "wisely fixed their own boycott". As well as complaining about the frozen food and the "lackadaisical and ignorant" staff, he complained about its "very dated style and approach", the "cramped booth seating" and "rather warn appointments", the shepherds pie that was "dreadful in every part", the noisy pin ball machines, and the "sleazy" café whose whole atmosphere "is really only conducive to indigestion". Which? were kinder when they visited in 1986.

On 27 August 1987 there was a fire in the northbound upstairs kitchen. The bridge structure itself survived, but the building on top was destroyed. It was left until February 1988, when it was wrapped in polythene sheeting, ready for reconstruction to begin. The motorway below was closed while firefighters were on site, due to falling debris. This event had been the highway authority's nightmare, and it is one of the arguments against building service stations above the road. In 2003 there was another fire in the car park which again damaged part of the northbound carriageway.

What is now the northbound car park was originally divided in two, with areas for cars and lorries. A new HGV parking area was later built in an area of woodland outside the services, in the late 1980s.

A 1993 survey found 20.3% of traffic was turning off for the services, making it very busy. This was prior to Stafford opening. 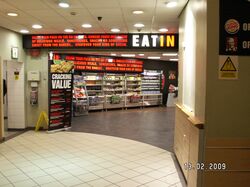 Today this is the middle of the services. But with toilets on the left (now moved), stairs to the restaurant on the right, and a snack bar ahead, this was once all the ground floor offered.

The original design had three entrances to the building, a transport café built next to the motorway, and the toilets right at the back (where they stayed until the 2000s). A shop was built next to the entrance. By this stage the facilities were The Granary, Little Chef, Julie's Pantry, Piknics, and 'The Shop'. The Little Chef was up on the bridge, in the old snack bar.

The northbound shop became part of the main building when a lobby was added in 1989. It had designated sections 'Childrens' Den' and '21st Street Audio and Visual'. There were also plans to add a Potters Warehouse in 1994. Piknics closed, and La Baguette (Fast Bake) opened.

The motorway network's first KFC replaced the southbound transport café in 1989. This and the toilets were the only southbound facilities, in what was a very small building. In 1997 the KFC moved to the bridge (replacing the restaurant), and the old KFC became the new The Granary. A significant extension added a shop to the southbound building too, and moved the game arcade to the front, replacing a small lounge area.

In 2011, a significant change to the northbound side saw the toilets moved from the back wall to a new position in the old transport café, alongside a Subway (previously Eat In).

The Little Chef became Red Hen, then Coffee Primo and is now, after being closed for a period, a Starbucks.

Burger King and KFC continue to occupy either side of the bridge. The southbound side has held the same layout for some time, with restaurants and toilets on the ground floor and an escalator up to an extension on the bridge.

A rejected plan to use Keele as a giant advertising hoarding - although its time in orange can be seen around the edge of this mock-up.

Plans to widen the M6 between J12 and J16 were announced in 1989. At the time, widening normally involved building a whole new motorway. Welcome Break had wanted to build a hotel on land adjacent to the service area, but were convinced to hold off until more detail was known.

Despite alternatives being considered, by 1992 demolition of the bridge and northbound facilities looked likely. Welcome Break conceded they would need to build a new, larger service area to the east, but were concerned it would lose trade to the new Stafford services. In the event the widening plan was cancelled, and Welcome Break decided to combat Stafford with a large extension to their own services, including adding the northbound Game Zone.

Keele still has no hotel but Welcome Lodges were planned again in 1997 and 2005, by expanding the site of service area and replacing the workshop area. An earlier plan by Fortes in the 1970s was rejected after legal difficulties, and the news they didn't own the land they wanted to use.