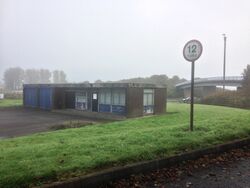 A typical police post, which hasn't been used for a while.

A police post was a key feature of service areas developed in the 1960s. They were usually simple buildings, separate from the rest of the complex, providing refreshments for police officers as well as a safe and dry place to carry out paperwork and interviews after leaving the scene of an incident.

Police posts were combined with motorway service areas because doing so reduced the need to build additional motorway exits, and made it easy to provide the building with electricity and water. It also helped the planning process to keep all the buildings together. There was no real benefit for the service station, indeed the whole point was that the police wouldn't need to use the public facilities.

Starting in about 1962, every proposed motorway service area would offer the local police force the opportunity to have a police post, and they would either accept or decline, depending on their local arrangements. At Aust, for example, the local police were happy with their facilities in nearby Bristol.

As policing became more centralised, and traffic police became a less common sight, these buildings received less and less use. New police posts stopped being built, and existing ones became abandoned, where they would then attract vandalism and detract from the area. When the motorway service areas were sold in the 1990s, this was an opportunity for some of the operators to take control of some of the old police posts, many of which have now been demolished.

National Highways Traffic Officers now have some of the roles of traffic police, but they just use the ordinary public facilities when waiting at a service area.