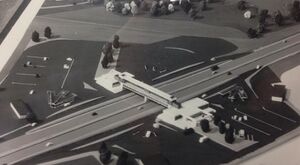 While operators who no longer exist have their history listed in detail in the Operators section, there are some who only exist on paper, as they never made it off the ground.

Note that almost all applications were made under the company's formal name, and in most cases a trading name would have been developed before the services opened.

The following developers applied to build one of the Ministry's proposed services, but were unsuccessful. Reasons are detailed on each service area's page.

The original firms surveyed are not included here, and neither are firms who asked to be involved but never produced a service area plan. This list is not complete.

The company responsible for the catering at Gatwick made a number of bids to operate the early services. Despite their poor plans and worrying finances, with every bid they got more ambitious, but were still always outbid.

Their architect was Sydney Clough, Son & Partners, who worked on successful projects at Knutsford, Medway and Newport Pagnell.

The Forton bid was made under the name 'Banquets Catering Ltd'.

Developers who only bid once

Since services were deregulated, private developers would often plan their own service areas, in the hope their successful plan would be taken up by an operator. It can therefore be assumed most of these would have gone on to be owned by a mainstream operator - but maybe not.