Unbuilt Services On The M11

For a list of current service areas on the M11, see Services on the M11.

When it comes to service stations, motorways generally come in two categories: those with very precise planning, and those with absolutely no planning.

The M11 is the one that blurs the two. There certainly is evidence of a plan.

After the line of the motorway had been fixed, 25 possible service area locations were shortlisted. These were whittled down to just three, which would all be evenly spaced with the usual 12-15 miles between them. As the M1's service areas had filled up within a few years, the M11's were going to be large.

The planned service areas were at:

Sheering was going to be held in reserve and only built when the other two reached full capacity. So far, nothing unusual.

Following the Warren Copse disaster, motorway service areas were now planned separately to the motorway itself, and didn't need to be confirmed before work on the motorway could start. This left room for a lot of indecision.

There was a cluster of possibilities for service areas between J9 and J14 named. This was the last section of the M11 to open, so it makes sense that they would be at a less advanced stage of the planning process. Many of these locations are roughly 12 miles from Newport.

Having said that, the M11 between J9 and J14 was only a few months older than J8-9, and that section made it into the original service area plan. The most likely explanation is that if Chigwell wasn't built, all of the other service areas would have been shifted northwards.

In 1976, after several years of uncertainty, the section of M11 which had been planned in detail between Hackney and Woodford was cancelled.

This would have a major impact on how the M11 was expected to flow. It would effectively render any service areas south of the M25 useless, but taking Chigwell out the equation would mean starting again from scratch. 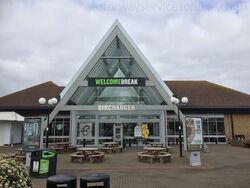 The large service area which was eventually built at Birchanger.

The three-stop service area plan outlined at the top of the page was destined to fail.

Firstly, compared with other motorways such as the M1 and the M6, the M11 was expected to be very quiet. This deterred potential investors. By the time the M11 opened, service area developers had shown little interest in several new motorways, and the M11 was no different.

Secondly, as the new planning process didn't require potential service areas to be finalised before work on the motorway could begin, the Ministry of Transport never needed to commit to its service area ideas. So there was always an air of mystery about the whole thing.

The Prior Report of 1978 suggested rigid service area planning be replaced by a "case-by-case" planning process, and it also encouraged the idea of building at junctions. As complaints from road users about the lack of facilities began to stack in, the answer was obvious: build just one.

A single service area in the middle of the M11 at Birchanger would receive more customers than several service areas. It would be cheaper to build. It would do the work of Newport and Sheering combined, and therefore only upset one set of neighbours. It became the main plan, and indeed the only plan.

Almost inevitably, Birchanger had its own planning difficulties and wouldn't open for another 17 years.

Of the original sites planned for the M11, only one was acquired. These sites can all be matched up with the map above. 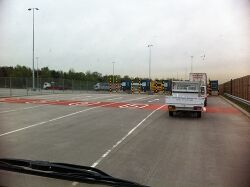 The land at Chigwell being used to manage construction traffic.

When the M11 was first planned, the Ministry still naively believed that motorway service areas near London would be the most profitable. As a result, Chigwell was their favourite.

To get it open, a public inquiry was held in 1971. The local MP said it would "ruin the amenities of a beautiful place", while residents were keen to point out Charles Dickens once described Chigwell as the greatest place on earth. Charles Dickens wasn't a fan of 36 acre service stations, it seems.

Considering how quiet the M11 was meant to be, the Department later revised their intentions and suggested Chigwell have only have a petrol station and café - like some of the Lake District service areas. It would have one of the first services to sell only one type of fuel.

The Department for the Environment were ready for the inquiry to fail, and prepared to make Sheering their new favourite. Chigwell Urban District Council vigorously opposed Chigwell, and recommended building something similar to Aust at M11 J5. The inquiry passed, and Chigwell was very nearly built.

The land at Chigwell was purchased, cleared, and connected to the motorway. Land was dug up at Chigwell and used to build other parts of the M11. A subway was built beneath the motorway for pedestrians to use.

In 1972 and twice in 1976, developers were invited to bid to run Chigwell services. There may have been an additional invitation. These all requested single-storey buildings only, perhaps so not to upset Charles Dickens.

The 1972 invitation to tender received no replies. The 1976 one received one reply from Trusthouse Forte who went on to win the contract and receive local planning permission. Forte's plan was designed by the same architect responsible for Burtonwood, and used a similar design. This time, the buildings would be a series of circles, rising up like a pagoda. These would be positioned close to the road.

Work was about to begin on the service area, when Forte revised their construction estimates and realised that costs had risen considerably. This, they felt, made it unprofitable and in an unprecedented move, they cancelled their contract at the last moment. It is likely that the faltering plan to complete the M11 was playing on their minds too.

Another invitation to tender was sent out, and no replies were received. It was then placed permanently on the back-burner. For the following decade, there was very little interest from any operator in new service area development.

The sight of unused land lying close to the London urban area was never going to be a popular option.

In the 1980s, the Department said they had received "numerous enquiries" about Chigwell, especially from recovery firms wanting to use it as a base. The official policy was that Chigwell had been "deferred" and would be built as soon as traffic levels rose enough to make it worth building. This status remained the same for as long as the government were involved in service area planning.

Instead, Chigwell was turned into a police control depot, as well as an emergency turn-around point for authorised vehicles. To do this a narrow overbridge with a 28 tonne weight limit was erected, as despite the space for connections to the local road network being available, they were never built. The police control depot was designed so that the motorway service area could still be built if needed. But the land remained empty.

In 2009 the southbound site was earmarked by the Olympic Delivery Authority as a temporary, off-site logistics facility to manage all inbound construction traffic arriving into the London site. The 33,000m² site was designed to provide security screening, scheduling and vehicle marshalling facilities for all inbound goods, controlling deliveries in real time in line with the site's requirements.

PJ Carey Construction, part of the Carey Group Plc, were awarded the contract to construct the project. It was run by DHL until the Olympic 'Games period' had finished in December 2012. There was the option available to DHL that after the Olympic use it may be used as a commercial venture, but instead it was put back to its pre-2009 condition of 'green land'. The subway, which had been in-filled, was opened again (it is now blocked off again).

The Road Haulage Association suggested it became a truckstop and campaigned to see that happen. The council have considered turning the northbound side in to a park and ride unit.

The address "Chigwell Motorway Service Area" is still used by many official sources. England's national highway authority still owns the land here, and the southbound side is fully signed with driver location signs throughout. They sometimes use a small section of land as Blunts Farm works unit. 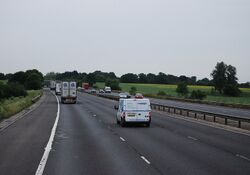 The site of Sheering services.

With the Chigwell issue never put to bed, nobody ever got round to working on the other sites.

A 46 acre site had been identified at Sheering. It was described as being "attractive, rural surroundings", and the intention was that it would only be built when the other two

By 1978, when there was an urgent need to build something, a report concluded that Sheering was "unsuitable except as a last resort".

As well as Sheering, there was another site a few miles to the south named Moor Hall. This was only expected to be used if Chigwell wasn't built, so that the M11's first service area wouldn't be so far north.

Not to be confused with Newport Pagnell, which does exist. For Newport (South Wales), see Magor.

The M11's service area at Newport was intended to open as soon as possible, but to ensure the spacing was kept even, the plan couldn't be confirmed until a decision on Chigwell had been made.

Despite the eagerness, Newport would have probably only had a small building on one side of the motorway, with a footbridge across the road. A design like this would not have been very profitable. In addition, Essex County Council opposed the prospect of a service area here.

A secondary site at Wendens Ambo was investigated as well. This was slightly north of Newport, 40 acres in size, but had to contend with the M11 being in a deep cutting at this point, which would have pushed the costs up.

A report dated 1975 said that Newport was likely to be replaced by Birchanger. It would be a long time before any progress was made on this. 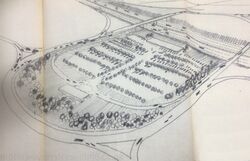 The unusual proposal at Harlow.

Some of the new motorway services once planned for the M11 we have uncovered include: