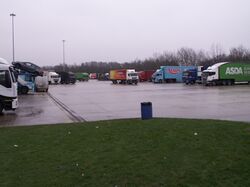 Lymm, one of the largest truckstops.

A truckstop is a service area which is primarily aimed at lorry drivers, providing somewhere to park, eat and use toilets and showers.

In practice there is an important third category: a place which provides the necessary facilities but (be it by choice or due to regulations) isn't signposted by the road. This website tends to only look at places which are officially recognised by the highway authorities.

The term "truckstop" is often conflated with lorry park. A lorry park is simply one facility that is provided, and it can form part of a truckstop, a service area or even stand on its own.

The following truckstops are officially signposted from a major trunk road. There are many more which aren't signed, or are only signed from more local roads. 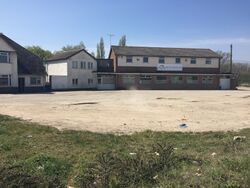 Kate's Cabin, one of the most well-known former truckstops on the A1.

Before motorways were built, the A-roads were lined with cafés for lorry drivers. These are discussed further down, but key to the history is that many of these places made additional income by providing cheap accommodation, known as "digs". This allowed the government to develop an attitude that HGV parking was a business matter, and if more accommodation was needed then they knew somebody would build it for them.

The motorways didn't change that. They had their own parking areas in the form of motorway service areas, but these were only designed for short stays and the government would only build them if they had a business who was willing to take responsibility for them. They did repeatedly consider creating motorway service areas for lorry drivers only, but that was always ruled out - partly because the businesses knew there was much less money to be made from HGVs.

What did change things was the invention of the sleeper cab, which haulage bosses loved because it meant that lorry drivers no longer had any reason to deviate from their route (and sometimes get up to go good) when they needed to sleep. The sleeper cabs created a new culture where HGVs would park anywhere and everywhere they could. In addition, drivers were now being closely monitored on their driving hours and route, so they couldn't head off looking for a better place to stop, even if they wanted to.

The watershed moment seemed to come at the start of the 1980s. By 1982 the motorway service area operators were on record begging the Department of Transport to do something about the amount of HGVs taking breaks in their tiny, short stay parking areas. They were happy to charge them for the experience - of course they were - but their concern was that they were so full they were routinely turning away lorry drivers, some of whom were so desperate for a break that they were parking in dangerous or disruptive locations.

There was clearly a market for a new generation of truckstops, which would have to be much larger than any of the traditional facilities from the 1950s. High construction costs and low profit margins meant there was only limited interest, and residents would usually oppose their development meaning it would be hard work to see the plans through.

Even so, there was some success: by the early 1990s a whole chain emerged called BP Truckstops, and there were three large, new sites signposted from the M6: Carnforth (part of the Truckhaven group), Lymm and J38 Truckstop.

BP sold their truckstops in 2002, and their successor, Nightowl, had long-running financial problems. The industry appeared to be in retreat. Since then, more facilities have closed, especially the smaller ones.

High running costs and limited income streams have been blamed for the closures, with security being a particular issue, but arguably the biggest problem is the land value. A large parking area on the edge of a large city is often worth a lot of money to a land developer, so landowners were receiving large offers in return for selling the land.

Highway authorities still appeared to be unsure how they should treat truckstops, with those named above being treated like motorway service areas, while others like J29 Truckstop only had signs referring to 'lorry parking'. This situation was clarified in 2008, with new regulations outlining what would be required before road signs would be provided. For the first time, a 'truckstop' was an official concept.

At the same time, England's national highway authority briefly began publishing its own detailed guide to commercial HGV facilities near their road network, but as with many initiatives their interest was short-lived.

New truckstops did continue to open, but the high construction costs and limited income meant few businesses would consider it. A new truckstop needs to be large enough to handle a large number of heavy vehicle movements, and the developer needs to pay for a safe connection to the existing road network. Those who do build them are often ex-hauliers who have personal experience of the difficulties drivers face.

The parking problems got worse, and it didn't help that new safety standards meant that many unofficial parking areas were now being closed. New regulations in 2010 permitted online motorway truckstops (truckstops which are directly accessible from the motorway and not via a junction). However, none have been built, due to there being no business interest.

A major development was the opening of Rothwell Truckstop in 2019. As it was opened by motorway service area operator Welcome Break, who already operated a truckstop at South Mimms, it leaves open the opportunity of major motorway operators building more comprehensive truckstops. This was one of the first times there had been evidence of a major business being interested in HGV parking.

Since then, Moto considered building their first new-build truckstop in 2021, to tackle the notorious HGV parking problems in Kent. There has also been considerable media interest in the issues affecting lorry drivers, probably for the first time in their history, as a result of the UK's supply chain issues. 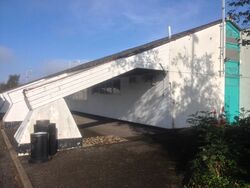 The old café at Woolley Edge is now disused.

A transport café (informally known as a truckers' café) is a restaurant reserved for HGV drivers only. They are different to truckstops in that they are there to provide food only, and their parking area is often informal and disorganised.

Transport cafés existed long before motorways, providing food and toilet facilities to lorry drivers. A survey in 1960 found that there were over 1000 transport cafés in operation in the UK, but as motorways opened many of the old cafés would lose their trade. The ones which made most of their income from selling alcohol or hostel rooms particularly suffered, as those facilities fell out of favour.

When the first motorway service areas opened, transport cafés were an integral part of them. The reason was that lorry drivers and car drivers were generally different social classes, and it was felt that neither wanted to mix with the other. The transport café was usually a cheaper place to eat, and provided a faster service.

The regulations stated that these motorway transport cafés must be close to the lorry park, with windows overlooking the vehicles, and were included either as separate buildings or part of the main building but with a separate entrance. Many of them were long, thin rooms. When closed, the café menu would need to be provided elsewhere at the services, with the same prices.

By the 1980s, the facilities for car drivers on motorways had become much less posh, as cars were becoming more accessible and the novelty of motorway travel had worn off. As a result, to save money, service areas developed a single café that would serve a simple menu to both car and lorry drivers. The separate motorway transport cafés quickly closed. Lorry drivers generally approved of the new arrangement, though they didn't like the steep prices.

At the same time, many of the traditional transport cafés on older A-roads were being purchased by Little Chef and Happy Eater, who banned all HGVs from their premises. This created an uneasy feeling that dedicated facilities for HGVs were no longer available. Some motorway service areas continued to rope off part of their restaurant for lorry drivers, though this practice ended in the 1990s.

An unexpected consequence of lorry drivers losing their reserved area - along with other changes that were happening at the time - was that lorry driving became a much less social job. Now, even when social areas are provided, they rarely receive much use.

The Return of The Transport Café

While the restaurants at motorway service areas are no longer divided by class, there still is a sense of favouritism. Motorway service areas are businesses which follow the money, and inevitably this means they are designed around car drivers on a leisurely day out. After the motorway restaurants were largely closed in the early 2000s, HGV drivers increasingly felt that the shared amenity buildings, usually positioned far away from the lorry parking, weren't offering anything for them.

While these are only small steps and it's still early days, it does point towards a return of something very similar to the original motorway transport café. This time, the HGV buildings usually contain the usual service area facilities such as a food offer, coffee shop, retail store and game arcade, but sometimes a gym is included too.

These new transport cafés are combined with other facilities. The traditional, stand-alone transport café of the sort previously seen on A-roads is unlikely to make much of a return. This is because many of the old cafés managed to keep their costs low by having an informal parking area. To cater for modern lorries and meet modern safety standards, a new development would need to provide a much larger, surfaced parking area, in which case you are effectively proposing a full truckstop.

As set out in the MSA Policy, MTs and TRTs must be no more than three miles from the motorway and not require drivers to pass through a settlement in order to reach them. They can't cater for other vehicles or else they surrender their status as a truckstop (in practice, many will have a car park, but they won't advertise it).

Other than this their required facilities are pretty much the same as what is expected of a full service area, be it an MSA or a TRSA.

Truckstops may also double-up as an operating centre, subject to an assessment on the impact it would have, where HGVs can be parked up for the night and drivers return home in their regular vehicles.

There are few requirements for the location of truckstops on trunk roads. Whether on a motorway or a non-motorway trunk road, a proposed new truckstop will often have to provide evidence that there is demand for a new facility, in order to justify what is often an unpopular development.

TRTs are covered on the A-road Signs page as 'lorries only services'.

For MTs, the signs were only introduced in 2008 as non-prescribed signs. They are similar to MSA signs but use white-on-black signs (like most signs aimed at HGV drivers) and substitute "services" for "truckstop", usually including the HGV symbol. Continuity signing should be provided using the existing available signs, and with black patches on other signs.

In the 2016 Traffic Signs Regulations and General Directions the signs were formally prescribed. Operator and brand logos are now permitted on the signs too. The rules also make clear that a lorry symbol must always face left unless it is accompanied by a right-pointing arrow.

Truckstops can be acknowledged on motorway 'list' signs, with "lorries only" next to their name.

Places which don't qualify for full truckstop signage may still be signposted at a junction as parking for HGVs. This signage shouldn't be provided in advance.