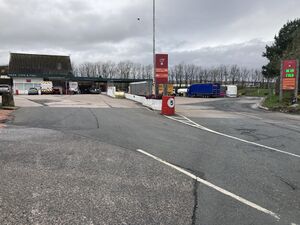 On the face of it, it's a typical truckstop situated at a motorway junction. However, it has a popular name running it, and is signposted from the southbound side of the motorway.

Trailer changeovers are also charged at £4 per trailer.

This information is provided to us infrequently by third parties. You should always check with staff on site.

Following the relative success of Westmorland's Tebay northbound services, on 11 June 1986 the company opened the complementary 'Junction 38 Truckstop' on the site of an existing forecourt. 70 parking spaces were provided, and parking cost £4.

Westmorland's expansion came despite initial complaints that Tebay's position offered it little HGV traffic, but then the new truckstop was in a more accessible location and suffered from less regulation.

This decision followed the planned Tebay southbound being cancelled in favour of expanding Killington Lake further up the road, although by the time the truckstop opened it wasn't long before Tebay southbound followed.

Today these services provide a popular stop of for HGV traffic but also provides general traffic joining the M6 at Tebay for a journey south (a popular route from the North East of England to Lancashire and wider destinations on the M6) access to the Tebay services offering, otherwise unavailable without a significant detour.

Westmorland began to brand the site as 'J.38 services', but the road signs still said 'Junction 38 truckstop'. They were changed to say 'J38 truckstop' in 2017.