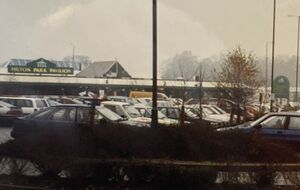 Pavilion, formed by Michael Guthrie (the former CEO of Mecca Leisure), bought the service areas previously owned by Rank in December 1991 for £86m. The working title for the new operator was Brightreasons II, before it legally became Pavilion Group in Spring 1992.

They called themselves "Britain's newest and most innovative name on the motorways", saying that they wanted to create a "holiday atmosphere". They had bright green branding inside, and areas called 'STORE', 'Snack Cafe' and 'Pavilion Restaurant'. Their motorway lodges were branded 'Pavilion Lodge'.

Curiously, of the 11 service areas they owned, 5 had their names changed. Some were changed by Pavilion, and others by their successor.

Commenting on the deregulation of service station planning in 1992, Pavilion wrote off the idea of a sudden wave of new services, saying "no one is going to take that sort of investment decision lightly". However, by 1995 it was estimated that they had 24 pending planning applications. They were also rumoured to be interested in purchasing Strensham.

As part of their opening publicity, an event was held at Hilton Park where part of the car park was turned into a beach, with ice cream, deckchairs and donkeys. In a separate event, massages were offered to drivers. In total, £20m was spent on refurbishment, turning around what they called a "distinctly tired estate". Large signs promoted the name of each service area next to the Pavilion symbol.

Pavilion spoke highly of HGV drivers, and continued to invest in dedicated facilities for them, even after other service areas had stopped doing this.

Michael Guthrie purchased his former brands Pizzaland and Prima Pasta. This allowed him to introduce Pizzaland to Pavilion services, alongside Burger King, making Pavilion one of the first operators to embrace High Street branding.

Guthrie described his vision of Pavilion services as being a "continental-style eating emporia". He said he was passionate about turning struggling businesses around and wanted Pavilion to be a brand people came to trust. 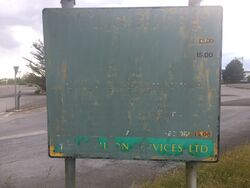 This battered sign in the old Aust car park is believed to be the last public evidence of Pavilion branding.

By 1995 the cost of planning new and refurbished services had hit them hard, and Pavilion were soon approaching potential buyers. With all four main operators at the time expanding rapidly, they feared they could be about to be squeezed out of the competitive market.

In April 1995 all of Pavilion's services were bought by Granada for £125million. A rebranding exercise lasted until June 1996. Granada said that they could increase each site's profitability by utilising economies of scale. As part of the takeover, Granada agreed to sell their Magor and Pavilion's Bolton West and Severn View.

The move, for the first time, knocked Welcome Break to second position as the UK's largest operator. They said that they had considered buying Pavilion but backed off because they didn't want to be investigated by the Monopolies and Mergers Commission. Only a few months later, Granada bought Welcome Break and consequently featured in a lengthy investigation by the Commission, who told Granada to sell off many sites.

Pavilion also inherited two smaller services on the A1 and A55 which were scaled down and sold off to Trusthouse Forte.

After leaving Pavilion in 1994, Michael Guthrie would go on to become a director at Welcome Break and at the MSA Operators Committee.

The following services were owned by Pavilion:

Pavilion Lodge had a number of "partner hotels" which kept their own branding. These were: