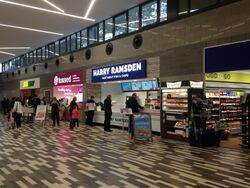 A quick service restaurant (QSR) is the industry term for what is commonly known as "fast food". Fast food is generally associated with burgers and fries, but QSR can apply to just about anywhere that can serve you with a single counter.

Since about 2010, the overwhelming majority of food available at service stations has fallen under the QSR heading. QSRs are popular for a number of reasons:

New service stations tend to be built with a generic dining area, and an area allocated for multiple QSRs, which tend to only be decided upon at the very last moment. As well as the famous fast food joints and coffee shops, some other QSRs include Harry Ramsden's, Greggs and Chow.

When QSRs were first introduced to the UK, they generally had a downmarket image. This idea was largely imported from America, and was a result of the industry being flooded with restaurant brands who were competing to sell food as cheaply as possible.

To try to broaden their reach, QSR operators began to compete over quality, rather than just price. Obvious examples would be the refurbishment of branches of McDonald's, Burger King and KFC throughout the 2010s to make them appear more welcoming. Coffee shop brands such as Costa and Starbucks have had the same experience, moving from the appearance of a functional seating area to that of a business lounge.

At service stations, the challenge has been to find QSR brands for customers who weren't already being catered for. Healthy eating has been a dominant theme, seen with the likes of Tossed and Leon. Somewhere like Pret A Manger tries to appear slightly more upmarket, while El Mexicana and Chozen Noodle broaden the menu.

Other Types Of Dining 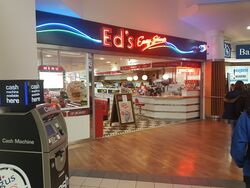 Ed's Easy Diner was a casual dining offer briefly provided at service stations. It had a dedicated seating and table service.

Well-known, family restaurants are normally classed as "casual dining". Also known as long-form dining, these restaurants offer broader menus, a more pleasant dining atmosphere and a more personal service, in exchange for requiring more time. The "casual" refers to it being accessible to all, rather than "fine-dining".

Service stations have been struggling with casual dining for a long time. They realise that there is some demand there, but not enough to make it work. PizzaExpress is perhaps the most successful example at the moment, while efforts have been made with Harvester and Nando's. PizzaExpress is often built with its own entrance, giving the impression that it is totally disconnected from the QSRs available next door.

Historically, the likes of Red Hen and Little Chef fitted into this category, but struggled to find enough customers to cover their costs. The earliest motorway service areas were required to have a waitress service restaurant, but by 1978 even the government accepted that these weren't being used and that the requirement was "a burden".

Some of the examples given on this page stray into "fast casual". This is a brand which doesn't fit comfortably into either category. There are no hard-and-fast rules, but you'd expect it to be one where customers order their food at a counter, before taking themselves to a seat.

The buffets and hot food counters seen at most service stations since the 1970s would fit this category, but they lack one feature which many people would expect of fast casual: a familiar menu which customers have seen before. Wetherspoons (at Beaconsfield), Wimpy (no longer used) and Leon would perhaps be better examples of this.