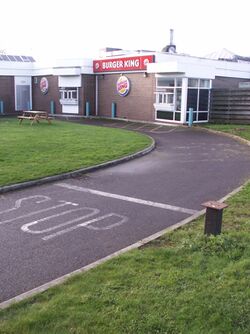 A closed Burger King drive thru.

A drive thru is a facility which originated in America, where people are able to use some of the facilities without leaving their vehicles. For the customer, it speeds up the purchasing time, while for the operator a drive thru can reduce costs by getting customers to pay their money and leave (meaning less seating needs to provided and the operator wouldn't have to pay VAT on the transaction pre pasty tax).

Another benefit is that a drive thru can provide resilience by providing some service even if the rest of the building has to close for some reason; this proved useful during the COVID-19 pandemic. They can also be built very quick and cheaply, as most drive thrus copy a standard building design with zero architectural thought or merit; the building itself can be very small with customers who want to hang around sitting in the car park instead.

Common drive thru brands in the UK are Burger King, Starbucks, McDonald's, KFC and Costa. While each has its own house style, these all boil down to pretty much the same 'glass box' building. More unusual drive thrus seen at service areas include Greggs and Subway, with Wimpy having appeared in the past and Taco Bell hitting the roads in 2022.

Despite the amount of attention paid to environmental and health issues these days, surprisingly little has been said about the impact of queues of vehicles waiting to use a drive thru, or about whether there are any health implications when encouraging diners to stay in their vehicle. Many councils who were quick to declare their support for climate action are surprisingly relaxed about having several drive thrus opposite each other which all have queues of traffic all night.

A more well known criticism of drive thru culture is litter. All takeaway food brands attract litter louts, but drive thrus encourage people not to leave their vehicle and therefore it's likely that they have encouraged some sleazeballs to throw their rubbish out the window. As well as being unsightly and bad for wildlife, this creates a vermin problem (as in rodents). Drive thrus also bring traffic movements close to the sales building, which make safe access for pedestrians and can cut off access to any surrounding outdoor space, even if a token crossing is provided.

The UK's first drive thru restaurant is believed to be the McDonald's in Fallowfield, which opened in 1986. McDonald's wanted to expand fast, and in 1991 they opened one at Markham Moor services on the A1. This used their standard prefabricated building design which was soon rolled out to main roads and retail parks across the country.

By this stage, most of the UK's motorway service areas were already built, so drive thru restaurants were unlikely to be built there. Instead, McDonald's were targetting development sites next to major A-roads, where their restaurant could operate independently of any neighbouring facilities. This strategy did take them to two locations which would later become motorway service areas: Lymm and Leeming Bar, but these were the exceptions.

Meanwhile, motorway operator Granada began using their relationship with Burger King to introduce drive thru restaurants in 1996. This included one motorway building, a motorway forecourt, and several Little Chefs. These didn't last long and soon closed. It's possible that they were reducing custom in the main buildings, or perhaps they were in locations where people were planning to stop to use the toilets anyway.

Other brands had a go - Roadchef looked at building a few drive thru Wimpys, and some A-road service areas did gain drive thru Burger Kings and KFCs. But in general, McDonald's were the only drive thru to take advantage of service areas.

The next noteworthy development came in 2008, when motorway operator Extra built two A-road service areas using the more traditional layout of having a single amenity building. These were both built with drive thru KFCs attached to the main building, and these have performed well.

The Return Of The Drive Thru 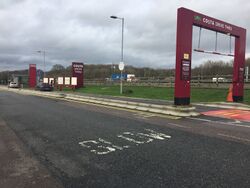 Easy to build and fits everywhere: one of the many new motorway Costa drive thrus.

Motorway drive thrus were pretty much non-existent until 2012, when Welcome Break brought them back. This time, they turned some existing old buildings into Starbucks drive thrus, an opportunity to take advantage of the increasing demand for coffee and, in particular, its popularity among commuters in a rush.

These new stores worked, and Welcome Break started developing stand-alone Starbucks coffee houses with a small amount of seating and a drive thru, meaning motorway service areas were starting to look more like their A-road counterparts with a cluster of unrelated buildings rather than one big one. In response, Moto, Roadchef and Applegreen have started developing Costa drive thrus, usually in tiny buildings without any seating, while EG Group have stuck to Starbucks.

The argument with these motorway drive thrus is that they are aiming to attract people who would otherwise have driven by. Where possible the drive thrus are located before the car park to allow people to rest. Welcome Break have previously provided figures which they claim show that drive thru coffee shops don't increase the traffic flow, implying that they are catering for people who were already using the facilities but perhaps not making a purchase.

Since about 2015, there has been an explosion of drive thru coffee shops across in the country, both in retail parks and by main roads. Starbucks have changed their building style to look slightly less homogenous, but otherwise they were all pretty much the same and usually placed besides an awkward roundabout. Some analysts have suggested we are now approaching the point where drivers can't possibly consume any more coffee, and the expansion will slow down.

New developments on both motorways and A-roads are now being planed with multiple drive thru units, and Roadchef have been looking at building stand-alone McDonald's drive thrus next to their sites. Meanwhile, Moto are looking to reopen some of the old built-in drive thrus which have been closed for almost 20 years.

The phrase drive thru bin is used to describe litter bins with a large funnel, designed to encourage their use by making it easy to throw rubbish into them from a vehicle. The theory is that fast food litter is often dropped because people don't want to leave their vehicle.

The bins were brought to the UK by McDonald's, but received widespread publicity in 2017 after Highways England saw them installed at Lymm. These were very quickly knocked down by vehicles and the trial was left.