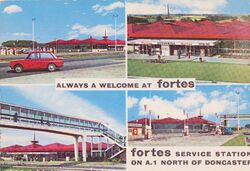 Through the 1960s and early '70s, most of Britain's motorway service areas featured on the front of postcards, often several times. These were sold by the operators to celebrate and promote their new facilities.

These days many people struggle to understand how a service station could be a holiday highlight worth capturing, but this was the era where travelling the UK was only just becoming practical for most families, so the journey could easily be the most exciting part of the holiday, especially if you were writing to people who hadn't done it yet.

It gets stranger than that, though, because infrastructure commonly made it on to postcards. Pictures of the M1 were sold in the 1960s, Spaghetti Junction was one of those featured in the 1970s, and even in the environmentally-conscious 1990s, a photograph of roadworks on the M3 was being sold as a souvenir. Postcards are a useful insight into what sights people were captivated by, and sometimes they were purchased as souvenirs rather than a way of writing to loved ones, especially in an era where personal photography was expensive.

The public's fascination with motorway service areas was unsurprisingly short-lived, and the range of photos being sold was quickly reduced for each new service area.

The full range of postcards that were sold is still pretty remarkable, and many of them had become very hard to find. We have now made almost all of them available to view.

The list of service areas that were featured on postcards is as follows. This doesn't include other motorway shots, or photos of motorway service areas in other countries, some of which were sold to British visitors:

Media enquiries about our postcards should be sent to us - we will share the ones we have hard copies of.