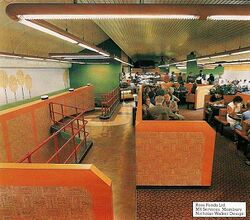 Membury services opened in 1972, designed to slot in between Leigh Delamere to the west and an undetermined site to the east: probably Ashes Copse, possibly Knight's Farm. An alternative site for Membury was considered nearer the Ridgeway, close to J15.

The 41 acre Membury site was opened to tenders in 1969, only after Leigh Delamere had been confirmed. The M4 would open in late 1971, linking together existing sections of motorway to create a long section of road with 82 miles between the neighbouring service areas at Heston and Leigh Delamere. With Membury in place, the gap to the east would now be 56 miles: still significant, but much better.

Ross won the bid and aimed to have Membury open in early 1972, in doing so reducing the gap as soon as possible. The government said the project should be "forwarded with all speed".

Ross originally wanted it to be a replica of their first site at Leicester Forest East, but they couldn't afford to manage the traffic on the M4 whilst the bridge was being built. Even so, remnants of the idea can still be seen: both sides have a restaurant on a second floor which is accessed from a staircase, with the option of eating outdoors on a terrace. Moving the restaurant upstairs creates a rare bit of space in the rest of the services.

The architect was H. V. Lobb & Partners and the contractor was A Monk & Co. The distinctive building design with its high roof and open views was noted upon opening for being very noisy and exposed. The idea was that both sides would have large windows facing south, along customers to appreciate the better views.

Both buildings were shaped like a T, with offices in the long leg and a concourse running along the top. The concourse had doors at each end, and, on the westbound side, toilets at the east end. In the middle was a take-away building and a shop, with more offices at the west end. Stairs and a ramp took people to the large restaurant area upstairs. The west end was designated for lorry drivers, while the north side was where all the kitchens and servery were. The west and east sides were flipped for eastbound traffic.

Inside it was brightly lit, with red/orange colours everywhere and pictures of trees along the walls.

The long downstairs corridor became a magnet for vandalism. An eastbound spiral staircase, provided at the rear of the building for staff use, still exists today but is now surrounded by offices.

Berkshire County Council had given permission for work to start on the service area in July 1970. However, the contractors responsible for building the M4 were allowed to use the service area site as their own compound until they finished in late 1971.

As a result, Ross were unable to start working on the service area and, although the opening was officially recorded as early 1972, this mainly consisted of a building site with temporary toilets, a refreshments hut and the petrol stations. Customers were disappointed.

The full restaurants were planned to open in August 1972, but didn't open until May 1973. Ross said that their reputation had been damaged and a lot of money had been lost.

In 1977, Ross took the unusual step of adding a garden centre to the westbound services. The Department of Environment approved the idea, but the local authority initially objected. A local garden centre ran the facility, and in exchange they agreed to maintain the grounds of the service area for Ross.

In 1977 Egon Ronay rated the services as "just acceptable". He found it clean and described it as an "architectural masterpiece", and it served "reasonable" convenience-based food.

In around 1978, Ross added new shops to Membury. These took the form of a large, flat building built to the side of refurbished main entrances. The main entrances changed from rounded corridors to a more simple, square style. The old shops became games arcades.

The restaurant appears to have been replaced with a free-flow design named 'The Buttery'. 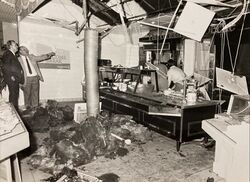 In 1983 Motoross became Welcome Break. Welcome Break provided separate buildings for their sister company, Happy Eater, to operate in, positioned next to the car park on each side. These included their iconic playgrounds.

They took Ross's idea of extending the westbound dining area and made it larger, with the extension housing new internal and external staircases. Downstairs, the space was used for a larger takeaway restaurant named Burger Break, and a larger games arcade. A strange, tall, curved cover was provided over the main entrance.

Welcome Break became part of the Forte group in 1986. They tried twice to build an eastbound Travelodge, and also provided escalators to the dining area by the eastbound main entrance. This created a new entrance. The game arcade was later moved to the entrance, a second shop was provided next to the existing one, and a customer service desk was provided in the main corridor.

Forte wanted to build a tie rack, dry goods shop and shirt shop. A Halfords was later trialled here, along with a coffee shop.

On the upper level was a coffee shop which offered a blend of waitress and self-service catering. The room had a brown, grey and orange décor with a thick striped carpet, and it used a numbering system to deliver hot food ordered from the counter. Fresh flowers and pictures served as decoration. Next door was a screened-off café.

Burger Break would become Julie's Pantry, while the restaurant would become The Granary. The Happy Eaters became Little Chef.

As a legacy of Ross's ownership, the petrol station was owned and operated by BP, instead of being owned by Forte and leased to Shell, as was standard at most Forte services.

In 1985 and again in 1994, the media described Membury as "Britain's busiest motorway service area". This claim seems unlikely, as the M4 is a relatively quiet motorway. It's possible that Membury was very busy for a period in the 1980s, and that this claim was then erroneously repeated.

A fire broke out at the westbound service area on 25 September 1990. A faulty extractor fan was blamed for the blaze, which caused £50,000 worth of damage and caused 100 people to be evacuated.

Concern was caused by the plan to widen the M4 between J12 and J15, which was announced in 1989. The proposal was never progressed in detail, so there was no impact on the service area.

The service area was visited by then-Prime Minister John Major and Jeffrey Archer on the evening of 20 September 1991. Major's choice of meal, chips and chilli con carne, warranted press coverage, as did the fact the Prime Minister queued alongside members of the public. 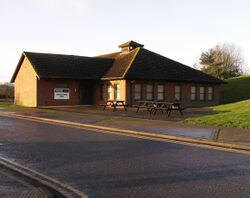 The restaurant building as a training centre in 2011.

In the following years, significant rearrangements occurred at both buildings.

The fast food units - now Burger King and KFC - were moved upstairs. These were joined by Food Connection, which became Eat In, and has now been broken up into more takeaway brands, turning the upstairs area into a food court. Chopstix Noodle Bar joined them in June 2017.

The old Burger Break became a large Starbucks, with steps down into it revealing that it is part of one of the early extensions. Toilets were moved to the office area at the back, creating more space at the front. Large extensions added new Waitrose shops on each side, with eastbound opening in 2013.

The Little Chefs became Red Hen, and closed shortly after. The westbound side became a training centre while the eastbound side was unchanged and appeared to contain a lot of the original furniture. Since 2012, a Starbucks Drive Thru and Regus Express meeting room have used the buildings. The Regus Express meeting room was later removed in 2020 following the coronavirus lockdown.

On 1 May 2017, Welcome Break took over the petrol stations from BP and changed them to their usual partner, Shell. The refurbishment included the Deli2go offering. Both forecourts underwent refurbishment during April and May 2022, rebranding under Welcome Break fuel in the process.