The M6's last service area was going to be at Chapel Green, but this required too many earthworks, so Corley was found instead.

The Ministry believed it was a jewel of a site: the centre of the UK's motorway network and the only proposed service area that looked like it was going to be commercially attractive. The other 29 ongoing projects were effectively a waste of money in comparison. The evidence supported Corley's positivity: it would be the first service area after traffic leaves the M1, where we already knew that catering sales were very good.

With such good prospects and the UK's other motorway service areas all being too small, a large plot of land was allocated to Corley. Local roads were diverted to ensure plenty of room was available. A zoning plan was issued to suggest how the land could be used while leaving space for plenty of landscaping.

When the service area went to tender, Granada were forbidden from bidding for it, as they already ran Frankley which technically was an adjoining service area. Granada protested that this was pedantic and were eventually allowed to bid.

Highway Restaurants came up with good catering and landscaping proposals that were begrudgingly called "the best of a weak bunch", but reservations were made about the traffic layout. The County Planning Officer disapproved of the buildings and the financial return was poor.

Mecca Leisure had already found fame with their unique service at Trowell. Their proposal for Corley had "little to commend it": it was complicated and expensive, and the building was dull and didn't fit in with the countryside.

Granada's proposal was also written off for being "unimaginative" and financially poor, though it was said to be structurally similar to what had been approved at Birch and rejected at Kempshott. Fortes' proposal didn't set the world on fire either.

This left us with Esso, who were currently creating the Taverna brand for motorway service areas, which was notorious for its obsession with futuristic, automated catering, with no waitress service. Their proposal was "the most interesting architecturally" (if "too contrived"), and offered the best financial return.

"Fortes are one of our best service area developers"
Ministry of Transport MSA Board, 1969

But there was a problem. Their allegiance to automated catering was totally unproven, and no oil company had so far opened a motorway service area on their own. The Ministry knew that Corley might be the most lucrative contract they hand over for a long time and they were nervous about handing it to a newcomer with a limited ambition.

For this reason, they played it safe. The Fortes proposal wasn't promising anything cutting edge, but it was offering a wide range of facilities and backed by an experienced service area operator who were "making a success of it". Fortes won the contract.

By the time Corley opened, most operators had decided it was best to design buildings that took customers' minds away from the motorway. Fortes still believed that a distinctive building would attract passing customers. They had hoped to build a bridge-restaurant here, but the footbridge had already been built by the Department for Transport, so instead they covered the footbridge with yellow glass reinforced plastic, designed to have aerodynamics like a vehicle.

"You see it from some way off and immediately want to slow down to investigate further."
Design Journal, 1972

The yellow GRP wasn't just "interesting", it was also chosen because it was durable and easy to maintain. The only maintenance the bridge needed was an annual waxing. The architect was Garnett Cloughley Blakemore and Associates.

The buildings themselves had steel frames, large windows around the dining area and flat roofs with cladding to hide the pipes. On the south-eastbound side was a cafeteria and a transport café with a shared kitchen, plus an entrance hall with access to toilets, a shop and slot machines. The north-westbound side was the same but with a grill and griddle available too.

Corley opened on 17 January 1972, almost a year after the M6 here was finished. 300 jobs were created and it was thought to be the largest service area in Europe when it opened. Despite this, the buildings were slightly too small, and the entry foyers soon became crowded.

The amenity building designed to look attractive to passers-by.

A 1972 edition of Design Journal compared Corley with the architect's previous work at Scratchwood. They concluded that Corley looked "cheaper and less polished", and called the orange upholstery "somewhat nauseating". They were impressed by the distinctiveness of the footbridge though, and remarked that this was likely to be the last interconnected footbridge to open at a UK service area. Overall, Corley was said to be both interesting and relaxing.

Unfortunately the service area did have a poor relationship with its staff union. Within a few months of opening, it had to close for a two hour strike on 15 October 1972, and again for a day-long strike on 24 June 1974. Female employees experienced further tension with the union in 1977.

Meanwhile in June 1975, 80 members of staff were made redundant as fears of subsidence from the coal seams below caused the north-westbound building to be temporarily closed. Forte had previously tried to force the National Coal Board to stop mining nearby. Secretly, Forte were delighted that the closures would allow them to reduce their losses.

There was tension with the Department, too. By the late 1970s Forte were refusing to extend the toilets, but did provide new takeaway catering units in the car park. The inspectors were unimpressed that Forte were only interested in investment that would make them money, and despite the initial problems, Corley was becoming one of their most profitable sites. They tried to take advantage of the crowds with facilities such as a bouncy castle and a crazy golf course, which got them in further trouble with the inspectors.

In 1977 Egon Ronay rated the south-eastbound service area as "poor". Although accepting it was clean and cheerful, even if the toilets did smell. A 1978 government review described the service area as "scruffy and prison-like".

Improvements to the service area were put on hold in the 1990s, as a plan to widen the M6 had emerged, which could have seen the place demolished. The M6 was eventually widened in 2020, but without using any extra land. 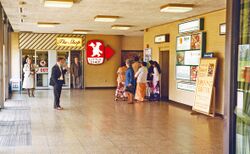 Originally each building had a shop, a main cafeteria and a transport café, with the north-westbound side also having a grill and griddle.

The motorway network's first Julie's Pantry was added in August 1979, following a £179,000 investment. By the mid-1980s Little Chef and The Granary had joined it to totally replace the dining offer. There was a Little Chef and Julie's on each side, which all closed in phases between 1995 and 1998.

There was also a Thorntons shop in the early 1990s.

On 12 May 2006 a Starbucks facility along with Coffee Primo was added to the westbound side. It was the first Starbucks to be built on the motorway network. The services had been the first to get a Coffee Primo several years before.

The hotel opened on 1 June 2008, but one had been planned here for many years - as early as 1972. At one time a Little Chef Lodge was planned. By 1991, Travelodges were being rolled out across all Forte services, but the proposal for one at Corley was rejected because it used land which was expected to be needed for the M6 J1-4 widening scheme.