Services which have burnt down 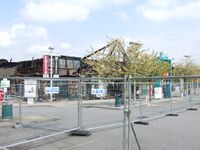 Cherwell Valley after it was burnt down.

Service areas are susceptible to fire damage: they have a lot of equipment crammed into old buildings that have been moved around many times, they are in use for long hours and they are often in isolated locations that take a long time to reach. It is noticeable that new or extended buildings tend to be more fire resistant.

As news reporting has improved and more service areas have opened, there is an illusion that the rate of fires has improved - we can only list known fires.