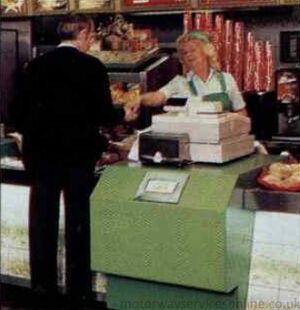 Only one photo tagged with Julie's Pantry at services. If you have one, why not upload it? 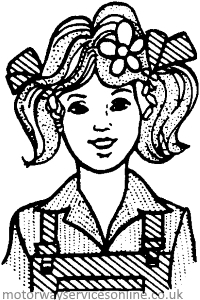 Julie's Pantry was a name created by Trusthouse Forte in 1979, first opened at Corley that August. They described it as "an exciting American-style fast food catering", introduced at a time where motorway catering was generally a sit-down affair, with a boast that all the food would be served in disposable packaging.

Forte suggested that running it would be "unique and challenging". It would compete with burger bars being introduced by their rivals, and Julie's would eventually be introduced to most of their services, as well as three city centre sites in London. At Chieveley, Forte considered providing only a Julie's.

Julie's had a dining area described as "bright and attractive", with "comfortable seating". The staff wore green dungarees, and were described as "pantry maids" and "pantry men". The logo showed a girl wearing an apron. The Guardian's 'Good Food Guide' wrote about Julie's: "nice place, shame about the food".

Forte became more invested in fast food in 1989, when they introduced KFC, often alongside a Julie's. In the 1990s, Julie's Pantry was streamlined and branded Julie's Express. It served burgers in a takeaway form from a counter, like any of the fast food brands that followed it.

In 1996 Granada bought Welcome Break, and announced they were going to introduce the big-name brands they now owned to Welcome Break's services. By 1998, all Julie's Pantries had been replaced by Granada's favourite franchise, Burger King. Many of those replacement Burger Kings are still in exactly the same place today.

Julie's used to be found at the following services: