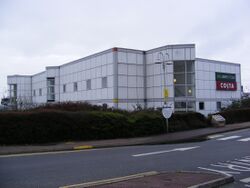 Suggested in the 1970s, designed in the 1980s, built in the 1990s: Thurrock manages to capture a little bit of all three in its location, architecture and design. Whether those are good or bad features, we'll let you decide.

Today's M25 is the combination of what was supposed to be two separate motorways. This section of it was intended to be called M16.

As a result, while investigations into services on the M25 concluded it should have services at Chevening and Colnbrook, this had no relation to what was planned for the M16.

Studies into the M16 tentatively suggested Hill Hall services, and something near or on the M20. Meanwhile, in 1977 a study from Essex county engineers suggested a service area at Mar Dyke (J30, about a mile north of here).

The Department for Transport strongly opposed that suggestion as their own plans made for better spacing; they had been keen on a site south of the River Thames and published a map in the 1970s showing a "Dartford services". What they didn't know is that the winning option had already been found.

Previous to this, Granada contacted the Department for Transport in 1976 to ask for some advice. An enterprising landowner had contacted them and offered the sale of his land, in the north-east corner of what was going to become M25 J31. Granada were confused about which roads were going to be built, and wanted to be sure they were getting a good deal. They were; this was the location that would eventually become Thurrock services.

It's also not clear whether it was Granada or the landowner who made the first move, or exactly what Granada were intending to build here. Under the regulations in place at the time, only the Department for Transport could build motorway service areas. It's possible Granada were only going to build a hotel.

Prompted by the merger of the M25 and the M16, and the new recommendations about service area planning made in the Prior Report, in the 1980s a study was held to consider where the M25's service areas should be built.

Thurrock emerged as one of the preferred sites. This was likely to be inspired by the landowner's willingness to sell, although a much larger 40 acre site was acquired for this. Other benefits were that it was a busy location and industrial backdrop would mean fewer objections.

The proposal was opened to bids in 1986, but no offers were made. Granada and Mobil both said publicly that they had considered it but decided it would not be safe to build a service area there, implying the work involved to make it safe would be too expensive. Heron had also been interested.

After this announcement, the press uncovered a report dated 1984 (between Granada going quiet and the contract being opened to bids) describing the site as containing extremely dangerous levels of methane.

The Department stuck with it, reduced the parking requirements and opened a new tender process. Esso won the contract in 1986 and announced that they would be working with Granada. Esso opened their forecourt in April 1990, with a 200-seater restaurant promised to open in mid-May 1990. This didn't happen and an amenity building opened on 16 June 1992. Temporary catering facilities had been provided since 1991.

"This modern and bright service station is on the edge of one of the most unlovely spots in Britain."
The Independent, 1995

As time has gone on, it has been suggested motorway service area design became less adventurous or unique. Thurrock bucked that trend. It aimed to take the industrial and urban nature of both its surroundings and the M25, and offer visitors a break in suburbia. When it opened it claimed to be "the world's most advanced" service station.

This was partly achieved with a lake at the back, which was a filled-in gravel pit. The entry road is also long and curvy, like a driveway from the chaos of the motorway to the relaxed services. The site was called "picturesque", with Granada saying that they were "investing in the environment". Principles like this were later used by Granada in the acclaimed Stafford and the original Cherwell Valley. 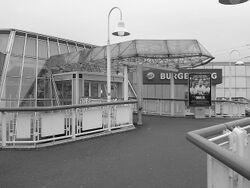 The entrance is effectively a long walkway.

Despite this, the environment remained distinctively industrial, with its pylons and gasometers, so the building tried to stand out architecturally too. The tall building had its entrance on the first floor, to take advantage of the slope towards the lake. This entrance is reached from two raised walkways running from the parking areas to the door. Inside, the walkway continued with a short length of balcony. Downstairs was the original restaurant and toilets, and at the back is a terrace. Large windows stopped the downstairs being too dark and created an exciting welcome.

The restaurant was described by visitors as "like an Italian-style garden", with plastic partitions moulded to look like topiary and a wooden pergola hung with artificial flowers.

Perhaps a better description of the architecture would be "bold". Its appearance has not stood the test of time like the services it inspired, to the point where it's hard to understand what the fuss was about. It certainly shares that era's obsession with making everything white.

Amongst other new ideas, the newly-opened services held 'clinics' with Granada customers to find out more about what they wanted.

On 26 March 1991, BBC Essex broadcast a lengthy feature on motorway services from the construction site at Thurrock. It's not clear whether the portakabins referred to in the programme were for the public or workers.

BBC Essex returned in December 1992, after the newly-opened service area won 'disabled toilet of the year'. 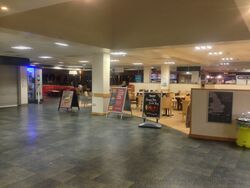 The top floor is one large, open area, now with almost all the facilities.

As the demand for a restaurant at all services fell, Thurrock's didn't deserve a full ground floor as few were making the trip downstairs to it. It was instead sealed off and is used for storage. Not the view from the first floor balcony the architects were expecting. Outside, the white cladding which was popular in the 1990s has now gone grey, and the grand walkway looks like any ageing bridge on the motorway network.

Now just the toilets are provided downstairs in their own dark basement, while everything else is crowded on the mezzanine. The obscure hotel entrance half way down the stairs was blocked off and a doorway added to the walkway outside. It was the first service area to be allowed accommodation from opening, hence the decision to build it into lowest floor of the amenity building, which made planning easier.

A 1994 assessment of the services found the turn-in rate to be just 3% (compared to an average of 12%), and this was put down to the long detour from the M25. As the junction has got busier, this continues to be an issue, especially when travelling north.

The long detour is made more contentious as there is competition from the nearby Lakeside Retail Park, which may be favoured by those willing to head out of their way.

Refurbishment in November 2006 saw Thurrock gain a WHSmith store as well as a M&S Simply Food outlet. The Regus Express workpod here was installed in December 2014 - the first Moto site to get a workpod rather than a meeting room.

This part of the country, being an important route to Dover and home to a lot of industrial estates, receives a lot of HGVs which in turn has put pressure on the service area. In 2010 half of the car park was commandeered for permanent use as a second HGV parking area, which in turn also reveals that the number of cars stopping here is perhaps not as high as initially envisaged.

Considerable criticism was waged at Thurrock following the 2018 Transport Focus survey, which branded it the worst in Britain. Moto were unimpressed by the conclusion, and pointed out refurbishment work was being carried out at the time. Uninspiring architecture and an industrial backdrop will also count against it, but in 2019 its score rocketed up to 93%, which it maintained in 2022.

The hotel was upgraded in 2014 to become Travelodge's flagship site. Travelodge built another hotel at nearby Thurrock Lakeside in 2017, and after the 2021 Coronavirus lockdown, they announced that the Thurrock services hotel would be closed in favour of the new one.

At the start of the lockdown, Thurrock had Moto's last EDC restaurant. It's understood that the hot food counter, which had been massively scaled back from its original food servery, was there primarily for the benefit of hotel customers and it did not reopen.

Police attended a protest on 24 August 2022, during which access to the filling station at Thurrock was blocked and pumps were vandalised by protestors.