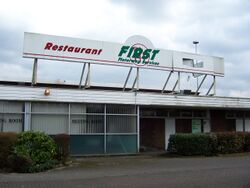 The contract to build the service area was won by BP, who until 2009 leased the main facilities out to First. Euro Garages (who, at the time, specialised in taking over unpopular petrol stations) took over the petrol station and then took over the whole site.

The site went out to tender in 1967, describing a 31 acre site where at least £200,000 must be invested. Planners had been expected to take advantage of the views over Rivington and Winter Hill - it is an open and exposed site allowing for a large complex. Traffic levels were expected to be low and it was classed as a "low value" site.

Until now, the Ministry had mostly been building major motorways like the M1 and M6. The M61 was going to be much quieter, but it followed the same rules for long motorways, in that it needed large service areas at regular intervals.

Kenning Motor Group made the only offer to build it. Their offer was rejected and the bids were opened again, with the suggestion that facilities be opened in phases. The new contract was again won by Kenning in 1968, who allowed BP to hold the main lease.

"There is every reason to assume they will [...] realise the full potential"
Ministry of Transport MSA Board, 1968.

The Ministry weren't especially impressed with the response, especially seeing as they had already spent £95,000 on earthworks and two bridges and needed a good response to justify that expenditure. They decided to go ahead with it anyway, as they couldn't afford for any more developers to be put off from bidding.

The winning bid showed a single-storey low-level design, to minimise the impact on the valley. The developer resisted pressure to plant trees along the bank of the motorway, as they wanted their buildings to be visible.

A ceremony was held on 17 December 1970, attended by Queen Elizabeth II, to mark the completion of the M61 and the service area. The petrol stations may have opened around this time. The northbound amenity building was then scheduled to open on 16 March 1971 - the actual opening date would have been in either March or April.

On the left, in order, was a shop, fast food unit, and two retail units, though these would have been moved around. At the back was the cafeteria, which had two doors completely separating it from the rest of the building. On the right of the hall was the café's kitchen, a small arcade and an area designated for telephones (even as of 2010). An office was block was attached. The original restaurant had large windows and an orange and brown décor, with long rows of benches for seats. It was open 07:00 until 22:00.

Space had been left for a southbound amenity building, and this opened sometime later. Until then, southbound visitors had to stop and walk across the exposed footbridge. It had a much smaller foyer area with tables, and a game arcade was added on the right. There was a shop on the left. Straight ahead was the restaurant servery, refreshment bar and a corridor to the toilets was on the right. The rest of the building contained the kitchen. A hotel was later attached to the main building with a connection by the shop.

Lessons had been learned from other service areas, which had been built too small. As a result, the northbound car park was absolutely huge. Special coach parking was provided near the entrance and, unlike at other service areas, the bays never needed to be removed. An official count in 1983 said Anderton had "approximately" 200 parking spaces for HGVs - far more than any other service area in the country at the time. In practice, the parking areas became so badly marked people just parked anywhere.

Other teething problems included issues with the road layout, with widespread confusion that prompted an urgent review of the road signage. There was also some confusion about who should maintain the second bridge, with the Department of the Environment not wanting to take responsibility for what they thought should be classed as the local authority's road. That conflict was comparatively minor compared with the battle which had already happened between the two local authorities, neither of whom wanted to be receiving the sewage that would be produced here.

Kenning Motor Group sold their responsibility for the main buildings to Top Rank in 1987. Top Rank were sold to Pavilion in 1992, who promised to invest in the site, and soon renamed it Rivington services.

Granada wanted to take over Pavilion were told they couldn't own Rivington and nearby Birch. A Granada management buyout saw Bolton West pass to First. With its large building and low traffic levels, it wasn't necessarily a great site to inherit, though Granada described it as "a prime location expected to enjoy an increase in traffic". 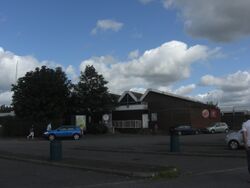 The old building in 2009. The steps are now the only thing left.

The change of the name to Bolton West happened in around 1996. The hotel changed to First Lodge (later changing back to Travelodge), and facilities included Wendy's (which became Burger King) and Piazza d'Oro (which became JavaBlue Cafe).

In the years that followed it became, quite simply, appalling. By the end of its life there was little care for any aspect of it, and its rating on this site was an average of 1.1 out of 5. The majority of it was falling apart, and the few staff left were reported to have a number of safety concerns.

First did not change any of the street furniture, which was mostly very faded yellow-on-green signs dating back to Pavilion.

In 2006 First applied for planning permission to demolish the northbound services and replace it with a new building. Unlike what was eventually built, this one would have been in the middle of the site, with a single entrance facing the re-landscaped car parks and fuelling areas. On the left of the building would have been the sales shop, and on the right a coffee shop and fast food offer as well as the toilets. This was given planning permission but never built.

On 23 July 2010 there was a fire at the garage on the southbound services which meant there was no fuel available for a period, and further facilities had to be provided in portable buildings. As Bolton West its main claim to fame is that it starred in Peter Kay's pilot episode for his sketch show 'That Peter Kay Thing', first aired in 1998. The programme was a 22-minute mockumentary titled 'The Services' which took a look at a typical day at Bolton West, including manager Pearl Harbour's quest to impress a celebrity. Kay reported that they were limited for possible filming locations as the major operators didn't want to be involved. The programme's storyline was revisited in 2016. 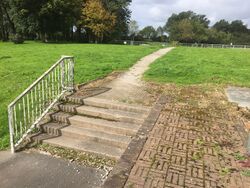 The old foundations and steps are still in place, but were never used for the new building as planned.

In July 2009 the site was sold to Euro Garages. In their biggest project at the time, they demolished the whole place and replaced it with something smaller, more manageable, brighter and with more franchised facilities. They wanted to change its name to 'Chorley services', but later decided to take it back to 'Rivington', perhaps because Charnock Richard services is also in Chorley.

Euro Garages were very critical of the state of the building, which they described as "tired" and having had "limited investment since opening". They suggested the building had been so poorly maintained that it wasn't worth trying to repair it, and argued that the petrol station was too far away from the main building. Partly this was just Euro Garages's philosophy, but they were right that at such a quiet site it wasn't worth dividing the trade between two buildings.

The new southbound building was built first and is on the site of the existing one, while the petrol station and lorry park have roughly swapped places. The southbound car park was re-landscaped but kept roughly the same shape. On the northbound side, the new building and petrol station are on part of the old car park. The old petrol station is just a swathe of empty concrete.

The final part of the plan was 'the annexe'. This would have been a new, slightly smaller, two-storey building in place of the existing one. There would have been a restaurant on the left, coffee shop on the right and toilets at the back. Upstairs was a conference room and offices. More car parking spaces would have been painted in the lorry park, and it would have made use of the woodland area in between the two parking spaces. This building was never built, and instead you just have bare land on the site of the old building, with concrete retaining walls, footpaths, railings and steps that used to serve it all still visible.

The motel survived but lost its direct connection to the amenity building. Instead it changed from a Travelodge to Rivington Lodge, with a couple of First-branded signs still inside if you know where to look. Two more buildings survived the rebuild: the northbound police patrol building, and a southbound garage which is used as a storage depot. Inside it still has some shop units fitted out.

While the new service area may not have the same interesting history - it is a typical modern building occupying a very large concrete area, it has at least improved visitor satisfaction dramatically.

A Cinnabon store was added to the northbound side on 7 September 2021. This was later removed in summer 2022 in favour of a new Rollover hot food offering.

In 2017, northbound side scored 100% and southbound scored 95%, again making the northbound side one of the best service areas in the UK but also revealing how erratic these survey results can be.

Rivington received a four star award from VisitEngland in March 2015.

In 2009 Euro Garages themselves referred to the site as the worst service area in the UK. Their source for this wasn't clear.

In 2000 the services were rated by The AA, who graded it as 'very poor', criticising poor signposting, a lack of outdoor facilities and unclean toilets. Woolley Edge fared even worse.

In 1986, Which? Magazine rated the services as "average", saying they felt they had walked "into a time warp", with its "drab colours".

In 1977, Egon Ronay rated the services as "poor". It was "cheerful and bright", and "the atmosphere was pleasant even if the food was not". He wasn't impressed by the use of convenience foods.