The A1 Great North Road used to meet the A604 Thrapston Road at a flat roundabout here. In the corner was the Brampton Inn (later 'Brampton Hotel'), which eventually gained its own petrol station. These facilities were demolished in the late 1980s, when the A14 north of Brampton was built.

A tiny section of the old A604 still exists, forming the entrance to the new development. A long part of the original A1 could also be reached from the service area (it ran east of the small roundabout), but much of it was torn up during the construction of the new A14 in 2019.

Several local authorities created a joint policy for service areas on the new A14 in 1987, several years before the road actually opened. This recommended providing new facilities at Brampton Hut, as it would continue to be an important junction between two routes and had history in providing roadside facilities. The road layout already had all A14 traffic negotiating the roundabout, so little diversion would be required for traffic.

Plans for a service area here were first put forward in 1989 by The Petergrove Consortium & S.P. Morley. There plans were later withdrawn in 1991. This became the first of many proposals for the site.

Rival plans from Tim Martindale were submitted in 1991. Their plans included a filling station, hotel, restaurant and parking for all vehicles. They were the first to be granted planning permission in September 1991 but they later withdrew their plans in 1995.

The third and final plan in 1992 came from BP Express was put forward plans for a filling station, amenity building, hotel, restaurant, police compound and parking for all vehicles. Permission was granted for this proposal in 1993.

Despite the many proposals, by 1997 the service area still hadn't been developed.

Whitbread submitted plans to build a Travel Inn and a Brewers Fayre restaurant in the north-west corner of the site in September 1997. This was joined in October by a joint application from BP and McDonald's which proposed a McDonald's Drive Thru restaurant, BP filling station, parking areas for all vehicles and a police compound to be built to the south and south-west of the site.

Both sets of plans were approved in February 1998 with all the facilities opening by the end of the year. Although other facilities have since joined it, the BP forecourt remains the main facility. 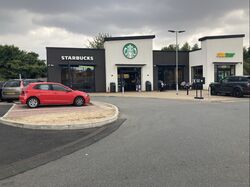 Some of the latest additions to the service area.

The land was divided up to make sure the original facilities left space for a number of future developments.

In 2004, Parklake Hotels Ltd submitted plans to build a 110 bed Days Hotel on land to the west of the entrance road to the site . This proposal was withdrawn in 2005. A subsequent plan was later submitted in January 2006 reducing the size of the hotel to 95 bedrooms, but these plans were refused in March 2006.

The Brewers Fayre restaurant was rebranded to Table Table in 2008. By 2013 it had returned back to its original Brewers Fayre branding.

Since 2011, several plans have been submitted to introduce new food units to the site. The first included plans to add a Costa Drive Thru, OK Diner and picnic area to the site and were approved in February 2012. In late 2012, subsequent plans were submitted including additional units for a KFC Drive Thru and Subway store alongside the planned OK Diner with the Costa Drive Thru being changed to a Starbucks Drive Thru. These plans also received approval in May 2013.

The filling station went on to gain a Wild Bean Café and in 2013 this was joined by a M&S Simply Food store.

Brampton Valley Ltd commenced work on the new units in late 2016 with the a 23.5 Degrees-operated Starbucks Drive Thru opening in April 2017 and Greggs and Subway units joining it in August 2017. A Burger King Drive Thru also later joined the site in 2018. Two of the three proposed smaller units remained empty, with one of them including a drive thru lane adjacent to the side. Grass space next to the Starbucks and Subway was later reutilised as additional parking in 2022.

Since this extension opened, a sign has been placed by the roundabout claiming that this building is called "Brampton Hut services", implying that the rest of the site is an imposter.

The service area has benefited from rising traffic levels on both the A1 and A14. In 2019 the new A14 Huntingdon Southern Bypass opened, which meant traffic on the A14 will no longer be directly passing the entrance to the service area, and will instead have to make a detour.

It had been planned that the new road would open as a motorway; the A14(M). That plan prompted Brampton Hut to be designated a motorway rest area, and a series of signs were drawn up to promote this. At the last moment, the A14(M) proposal was dropped, and instead more bog-standard trunk road service area signs were erected.

The decision to designate it a motorway rest area, rather than a full service area, was due to the limited facilities available at night.

The impact of the A14 changing course was difficult to predict: the new access is somewhat convoluted, and many people are likely to be put off. In the long term, the upgraded roads could lead to more potential customers. We do know that the Greggs store closed in 2020, leaving all three of the smaller units by the entrance vacant.