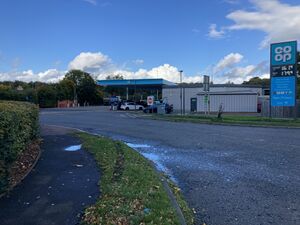 A business park at the Moor Farm Roundabout on the A19 offers some facilities for motorways.

Parking within the Beefeater and Premier Inn car parks is free for customers and hotel guests only and you must provide your vehicle registration to the restaurant or hotel to claim this. Chargeable parking is also available between 8am and 6pm, 7 days a week at the cost of £2 for up to 3 hours and £5 for up to 10 hours. Fees can be paid via the Horizon Spaces app using location code 6392.

These fees are strictly enforced by Horizon Parking. 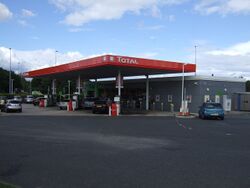 The Total forecourt, pictured in 2012.

This land was suggested as the perfect place for a service area by Northumberland County Council in the 1980s, as part of their vision to create a commercial zone here. At the time, what's now the A19 was the main A1 towards Edinburgh.

The first formal proposal was made by Norfolk House Group in 1986, who said it was the first phase of the project. This showed a hotel at the western end of the site, a restaurant in the middle and a filling station in the eastern corner. Space was left for a car showroom to the south.

When this plan was renewed in 1989, Travelodge, Little Chef and Texaco were named as the brands lined up to trade at the site. Norfolk House were bought by Trusthouse Forte in 1990, who submitted new plans for the Little Chef and Travelodge. Despite planning permission being secured and renewed, it was never taken forward, because Trusthouse Forte had also acquired the nearby site at Seaton Burn from Norfolk House.

Meanwhile, Heron built a petrol station here in 1992. They called it Exhibition service station, and it included a Snax 24 shop. It had been rebranded to Jet by the early 2000s.

The forecourt was redeveloped in 2007, gaining Somerfield branding. After Somerfield was sold, the shop changed to Co-op Food in 2010, but the main filling station became Total. It then became Co-op Petrol in 2017.

With no progress from Trusthouse Forte, Whitbread were granted planning permission to build a Brewers Fayre and 40-bed Travel Inn on the western side of the site in 1997.

By 1998, the car showroom originally planned for the south of the site had not materialised and a drive thru restaurant was granted planning permission instead. Despite originally being named as a Burger King, it was taken forward by McDonald's.

The hotel building has been extended several times, doubling its size. It became Premier Inn, while the main restaurant became Beefeater.

An InstaVolt electric vehicle charger was installed in the McDonald's car park in February 2021.