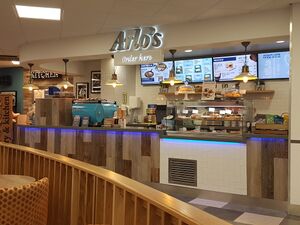 Arlo's was perhaps Moto's last effort at a self-branded, sit-down restaurant. It was first introduced to Chieveley in 2015 and was rolled out to Moto's neighbouring services during the first half of 2016.

Arlo's was themed around a patisserie, and its introduction is usually accompanied by a thorough redesign of the serving area, using more lavish furnishings than one would expect to find in a motorway café. Unusually for Moto, the coffee served was not Costa but Extract Coffee Roasters. Alcohol was also available at some sites.

Arlo's was one of a number of catering experiments Moto were looking at around the same time. Others included a franchised branch of Harvester, and a pub brand called Bar & Grill. Although Arlo's was functionally the same as the EDC it replaced, the revised menu and layout created a fresher appeal which Moto hoped would see a higher turnover.

Out of these brands Arlo's appeared to be the most successful, and became one of Moto's preferred catering brands. Arlo's was included in plans for new services, but for a while it still wasn't introduced to many existing sites as fitting it out can be expensive.

The Chieveley site remained the most thorough refurbishment, because it was the main eatery there. At sites with a food court and a shared dining area, Arlo's was able to be introduced for a lot less cost. The down-side to this was that, without its styled dining area, Arlo's didn't stand out as much. 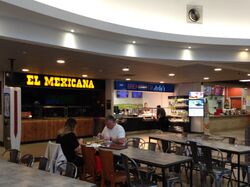 A much smaller Breakfast @ Arlo's branch.

In early 2019, the Reading and Wetherby branches were made smaller. Under the new title Breakfast @ Arlo's, these branches were only open in the mornings to serve breakfast. In the afternoon, the same unit would be re-branded Chow. By combining the two Moto were able to save more space for more fast food units.

Further changes came later in the year. Moto stopped promoting Arlo's in November 2019, and a few weeks later the majority of Arlo's and Breakfast @ Arlo's restaurants were closed. This left more space for popular fast food names, but is further evidence that the sit-down restaurant trade is being removed from the motorway network almost entirely.

All Arlo's restaurants had closed by 2020 with Chieveley closing last in March 2020 during the COVID-19 lockdown and then not reopening. In the end, despite there only being one restaurant remaining, EDC lasted after Arlo's, with the final branch closing in 2021.

Feedback from staff suggested that one of the biggest barriers for Arlo's was that customers assumed it would have a slow service speed, even though the menu had been designed to keep waiting times down.

Arlo's used to be found at the following service areas: