A modern motorway service station is usually an empty, soulless hanger. It is there to perform a function and meets most needs quite well. But in a time when there were much fewer of them about, a lot more thought went into how they can be exciting and unique. That idea never really went to plan, but here we look at some of the more striking ideas. 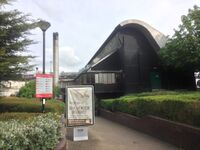 The tall building shields the unattractive side.

When Ross won the contract for Membury, they only had one existing service area: Leicester Forest East. Operating it had been a battle against theft, government regulations and penny-pinching motorists but Ross had finally got the hang of it and wanted to duplicate its grand building and motorway walkways with a new, sister site. Until they saw the price tag.

Most bridge service stations were built before the motorway opened, and when Ross discovered how much it would cost to build over an open motorway, they set about working on an idea which could be just as grand, but steered far away from the live road. The solution was two tall and elegant buildings, both with second-story restaurants and south-facing windows and terraces. To the south was the remains of a former airfield, and the two buildings were slightly offset so that diners on both sides of the motorway could see far across Wiltshire. All the circulatory roads were to the north side, again keeping the unsightly things out of the way.

Downstairs, all the unsightly facilities such as the toilets were shielded by artificial hills, while the tall roof across the entrance was an early effort at the atrium design which went on to become commonplace. An upwards escalator created a grand arrival for customers trying out the restaurant, while the practical matter of getting down again was relegated to a staircase at the far back.

In reality, upon opening, Membury's tall roof created a very noisy atmosphere, and despite the artificial hills it didn't blend in to the surroundings it wanted to be part of at all. The empty downstairs area was at least prime for retail space later on in its life. A motel was eventually built on the southbound parkland, looking like it is drowning in the surrounding hills, but as a final 'forget you' to the idea of open space. 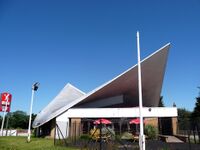 The newer restaurant slotted underneath the filling station canopy.

Confession time, this one isn't on a motorway. In fact strictly speaking it isn't even a service station - the name applies to several. The A1 is full of interesting buildings built at various stages in its life. The abandoned Wansford is certainly worth checking out if you like unusual architecture. And then you have the motley collection by the former Markham Moor roundabout.

Over time three different service stations have become magnetically attracted to this major junction on the M1. On the north-west side were two restaurants, once a Kelly's Kitchen and a Happy Eater. High costs of steel following World War II saw an attraction towards concrete shell-shaped roofs, popular across Europe for the previous 30 years. The architect Sam Scorer was particularly fond of them, and saw one used to create a fancy petrol station on the A1, opened in 1961. The roof is supported by four five-foot pillars at the low ends.

When the filling station closed, a restaurant was simply slotted underneath. It moved between owners and became abandoned, but went on to become iconic for passing motorists. So much so that when work started on replacing the roundabout here, it was the support of motorists which saw the new road layout save the building. It became a listed structure in 2012.

With competition from surrounding facilities, the restaurant here looked unlikely to be anything more than a magnet for graffiti. In 2019 it was refurbished ready for a new use. 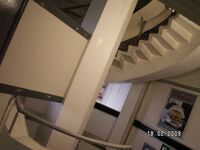 The fantastic staircase sets the tone for the high-flying restaurant.

In all their walks of life, Top Rank were pioneers of grand architecture. Despite being strapped for cash, they wanted their amenity buildings to be a must-visit destination, going well beyond the basic required facilities.

With bridge services and towers now well-established on the motorway network, for Hilton Park Rank decided to try having a three-storey building. Although well-finished the first and second-storey facilities were quite unremarkable, in fact the architecture was slightly cold and clinical. The pride was on the third floor, where the building looked disconnected from the two floors below, with a floorspace sticking out far beyond the building below. Even the windows leaned outwards, the idea being to provide the widest view possible for diners on this top-floor restaurant. It was a service area serving traffic leaving Birmingham, and yet it said much about Birmingham at the same time too.

The saddest thing about Hilton Park is that it never had a chance to succeed. All service stations found that as we moved towards the 1970s, customers didn't want long walks across bridges and up stairs to fancy restaurants; motorists wanted to get in and out again quickly. All service stations also eventually discovered that such grand buildings were very expensive to maintain. At Hilton Park, time moved particularly quickly. By the time it had been designed and built, the motorway wasn't ready for three years, so it remained locked up and fenced off. When it opened, the nearby M5 kept being closed, taking away more trade. So by 1971 when it was decided that the third-storey restaurant cost too much to run and should be closed, it had never really had its moment. Even the restaurants on the second floor later moved downstairs where the most passing trade was.

An even bigger shame is that it might have got it so right. Hilton Park sits next to one of the biggest traffic bottlenecks in the country, and throughout the 1990s the biggest difficulty was managing all the custom it received. Huge ground-floor extensions have been built to bring restaurants and shops to the customers. Serious plans were considered to tackle the parking problem by building a second-storey car park, with a second-storey entrance. Meanwhile large amounts of floorspace has sat unused and isolated on the third floor.

Now the demand for High Street shopping has died down even that furore has passed, with lengthy corridors passing closed units as customers head to the toilets, at the far back.

To the untrained eye, the services are easily missed.

There has been a tone throughout this page that has been slightly critical of all modern service station designs, that they are all too easily built with each building looking the same and no local identity. There have been a few which have broken free of those reigns, but none more-so than Gloucester.

Family-owned Westmorland gained a reputation for doing things differently having owned Tebay for nearly 40 years. Tebay is arguably the most scenic location to build a service station, and truthfully Westmorland came to own it largely because no-one else was interested. However for precisely those reasons, it has grown to become one of the most popular services in the country, with Westmorland learning to make the most of their distinctive independence.

With that behind their name, when Westmorland found a gap in the market at Gloucester, they knew nothing less than the most environmentally-sympathetic design and full participation in the local community would do. To the thousands passing by on the M5 the scenery here may not be particularly remarkable, but with their local knowledge Westmorland knew that it was, and they knew what they could do about it.

The grass-roofed buildings curve seamlessly into the local environment, with large windows at the back pointing away from traffic. It is kept light by being tall, and beams holding the roof up help remind you that this is somewhere special. A wide and well-landscaped sliproad informs arriving traffic that this isn't your usual service station, while gravel paths around the site suggest it could easily be nothing to do with a motorway at all. Nearby services knew they were in trouble when the plans went live, and tried to have it cancelled.

When a northern-based firm said they would be building a motorway service station in an area of outstanding natural beauty, it's no surprise that local residents (who had fought off service station plans before) were not impressed. Now they can see it for themselves, most have been won round, or at least feel that they've got off lightly. Gloucester could easily have been a tall-glass shell next to a fountain like all the services built a few years before it, but instead it dared to be different. Where one leads others follow, and sure enough all of the services proposed since Gloucester - include a grass roof.

In November 2015, the hastily-built Lancaster (Forton) services turned 50. It's no surprise that it comes first here.

In 1965, there were eight motorway services open. They were all struggling to promote themselves, and those which were above the motorway were finding that they were difficult to maintain. Ruling out the bridge design, which was the most common design on the M6, Top Rank decided to build something different at Forton. A 65-foot tower sticking out from the building would make the services distinct and recognisable.

On that basis it has certainly stood the test of time. Forton is still unique and it is still a recognisable landmark. Never mind that the restaurant at the top of the tower didn't attract enough custom to keep it open (lifts are real psychological barriers to customers who are on a long drive), and never mind that the maintenance on it is so difficult it has fallen into disrepair. Even though they may allow it to go unused, current owners Moto clearly cherish the nuisance but popular building design. If the aim is to create an icon, this one was a real success.

The luxury observation platform built on a second floor above the tower's restaurant still attracts curiosity today, offering fine views on a good day and an unusual vantage point for watching traffic (albeit reserved for authorised visitors) at the worst of times. Inside, much of the former restaurant can still be made out, albeit filled with unused furnishings from various eras.

With such a grand structure standing next to the northbound entrance, it is easy to forget the rest of the services. The main low-level restaurant sits in a hexagon hoisted above the building's supports, sticking out over the floor beneath to get as close to the road as possible. Large windows are again the order of the day here, looking futuristic on the publicity leaflet. On the southbound side, a small second-storey restaurant is all that is initially offered.

As with Hilton Park, it's likely that the tower restaurant never turned a profit.

Modern extensions have added significant floor space to the first floor, particularly on the southbound side, but with the northbound extension masking the support for the tower which was originally clearly visible. The lifts still function, albeit only to carry customers from the entrance to the first floor. Find yourself in one of the newer retail areas and you could easily be in any other service station. It's only when you turn around and see the tower that you realise you're not.