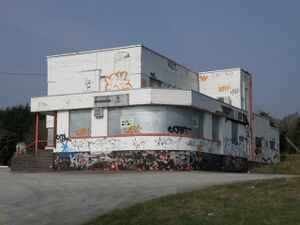 The Wansford Little Chef is one of the most iconic sights on the A1, thanks to its distinctive building, totally different from the standard design normally used by Little Chef.

The Wansford Bypass opened in 1929, and in 1932 the building opened as a Wansford Knight, positioned at the Wansford Crossroads. It was part of a chain of roadhouses. The architect was E L W Davis.

The building was better known as The New Mermaid, after a nearby pub took over in the 1950s.

It then became a Little Chef in the late 1970s. Little Chef made a number of changes to the building, changing the windows and filling in a canopy. It wasn't ever an official service area, but was more of a landmark and one of their most well-known branches.

The restaurant closed in 2007, though Little Chef continued to lease it for a time, while the building attracted a considerable amount of graffiti. Attempts to make it a listed building failed because of the changes and plans to redevelop it were met with objections.

Harris McCormack Architects Limited (ArcHaus) reopened the building in 2015, after considerable renovation works. They had their head office on the first floor and a Ducati motorcycle showroom on the ground floor. Following the coronavirus pandemic in 2020, Ducati closed their showroom meaning the ground floor now lays empty once again.