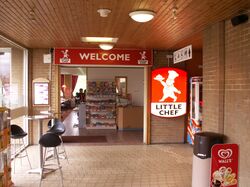 After the Sutton Scotney Bypass opened in 1981, the family who owned Barton Stacey services arranged to purchase some land here to develop a service station. Outline planning permission was obtained in November 1983, and the site was sold to Shell and Trusthouse Forte soon after.

Forte were interested in this site as they had lost a few nearby Little Chefs to road improvements. They started work on the service area in 1986, and opened it later that year, shortly after acquiring the brand name Welcome Break. A late change saw Sutton Scotney services open with both Welcome Break and Little Chef branding.

On both sides was an amenity building with three sections: a foyer, Welcome Break shop and toilets in the middle, Little Chef restaurant to the left and The Granary to the right. Trade in The Granary was often slow, and one was quickly converted into a shopping area. The other later became conferencing facilities.

Architects soon described Sutton Scotney as a "successful test" of "the concept of providing high standard comprehensive facilities on principal roads". It was one of the first service areas to truly treat an A-road like a motorway, an attitude which has been repeated elsewhere many times since. 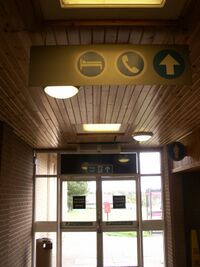 Granada signage within the services.

When Trusthouse Forte and their owners Granada were forced to sell Welcome Break's motorway sites, Sutton Scotney managed to stay because it isn't on a motorway. Unable to use Welcome Break's branding, Granada took it on as their own and refurbished it to match their own style. This included adding a Burger King in what was the Granary area.

In 2000 there were plans to add a stand-alone retail catering unit, but no further detail is available.

When Granada became Moto, the Granada branding was removed but little Moto branding was put up. When Moto was sold on, Sutton Scotney was classed as a Little Chef site and stayed with them.

As Little Chef's primary concern was their own restaurant, and they had enough trouble managing their own finances, under Little Chef's ownership the site became increasingly dilapidated. The problem was not the restaurant, but the large grounds which Little Chef were either unable or unwilling to maintain.

The Burger King franchise closed due to low patronage, leaving a large portion of each building disused. In 2012, The Coffee Tempo! here was also replaced with Little Chef Express along with 10 other former Coffee Tempo! sites.

Historically the hotels here had been very busy, and by 2010 Sutton Scotney was one of very few Little Chefs to have a Travelodge on both sides of the road. As part of the Travelodge's own review of their estate, both hotels here closed in August 2013. It may be that they were unimpressed by the state of the site, too.

In August 2013, Kout Food Group purchased every single Little Chef, with the exception of Sutton Scotney. It stayed as a Little Chef for six more months, but under different owners.

Having recently sold nearby Winchester and experimental A-road service area Symonds Yat, in February 2014 Roadchef purchased Sutton Scotney services. They may have been inspired by Welcome Break's return to Peartree.

Roadchef announced they would be turning the two sites into their standard Costa/McDonald's/WHSmith combination and introducing a games arcade, which would bring every unit back into use.

The electric vehicle charging points were finally switched on in 2018. Roadchef had held planning permission for them since 2014, but there had been issues with the landowner.

Although Roadchef placed their name on the service area as soon as they acquired it, internal documents often use the name of their subsidiary, First Motorway Services Ltd.