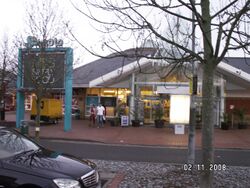 When the M4 was being planned in the 1960s, there was going to be a service station at Warren Copse, near Maidenhead, and another one at Ashes Copse, near Theale.

Warren Farm hit a number of planning issues that threatened to delay the whole M4 project, so it was agreed that the service areas would be pursued separately. A number of alternative options around the Reading area were considered, including Knight's Farm, Warren Farm and Burghfield Road.

As no progress was made, the M4 opened with a large gap between service areas - 55 miles between Heston and Membury - and the authorities continued to fail to agree on where the missing service area should be placed. In 1986, after 20 years of debate, the Department of Transport insisted that they were investigating a new service area "in the Reading area". This would later turn out to be Field Farm, an old landfill site.

In 1987, Mobil made a plan for Field Farm. This was rejected because the Department of Transport were still insisting that they had the issue in hand. The plan had slip roads at the western end, with an amenity building in the middle. It came with an alternative option which involved building on the westbound side only, with a flyover allowing eastbound traffic to use it.

In 1992 the Department of Transport ceased all involvement in service area planning. As a result, Mobil were free to develop their plan, and chose to lease the site to Granada as the operator of the main facilities. Their next plan had the westbound amenity building positioned further from the road, with both car parks being west of their respective amenity buildings and the motel to the west of that. This was revised to the present layout before construction started.

A plan to widen the M4 here was announced in 1989. As a result, the development deliberately left a 67 metre gap between the motorway and any construction, to allow space for a whole new road alignment to be provided, as had happened in the past. The slip roads were positioned so that they could easily be realigned to meet a new motorway. When the work eventually took place in 2019, it was done on a much smaller scale, so the widening strip remains unused and can be seen in aerial views.

Reading opened in 1995. Each side had a glass pyramid entrance, painted dark red. This design survives on the westbound side but with new signage and colours. The main part of each building was a circle with low, wide windows. Parking was charged at £5 for cars, £8 for HGVs and a £25 fine for anybody who was caught leaving their vehicle overnight without paying.

Granada invested £32million in the site, describing it as an "excellent location" and expecting it to be among their top five performing service areas.

Part of the car park was leased to a pallet business, which prompted complaints from the Highways Agency, who asked the local authority to intervene. 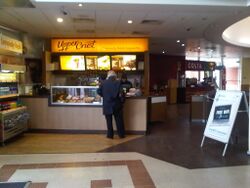 The original layout of both buildings took the form of a simple atrium, with a free-flow Granada Restaurant, a Burger King, a short corridor leading to the toilets, the arcade and a shop all located around it. The eastbound side soon gained a Granada Lodge too.

The first change came in 1997, when Granada added a Little Chef restaurant, their new acquisition, to the end of both toilets corridors. Granada's plan was to use the Little Chef to allow them to close the main restaurant in the evenings. The westbound Travelodge was built at the same time.

In 1998, following their merger, Mobil's petrol station branding was changed to BP Express.

In 1999 there was a plan to turn Reading westbound into a test case for a business centre. This took the form of a large coffee lounge, described as "an airport lounge for motorists". It would have been built in the gap between the main atrium and the hotel, and was a legacy of Pentagram's plan to turn Granada around.

At the same time, Granada chose both sides of Reading to become examples of their mini shopping centre sites. Five retail units would be added to the front of each building, including a Ladbrokes. Only the eastbound side was built. One possible reason for this was confusion about what the maximum permitted size of a shopping centre at a service station was: the Highways Agency said it was 5,000sq ft overall, but Granada insisted it should be interpreted as 5,000sq ft per side. They also looked at adding a Granada 2Go takeaway unit to the front of each building, but neither of these were built.

In around 2001 a Burger King drive thru was going to be added to the petrol station, like at Stafford (North), but the plan was withdrawn.

In 2002 the area designated for the eastbound Little Chef became a BT Workspace. It was the sequel to the coffee lounge idea, and boasted contemporary perks of the time such as a phone and internet connection. They also looked at moving Ladbrokes to a separate building, but this wasn't built.

Some of the eastbound retail units were later combined to create the UK's third motorway M&S Simply Food store in 2004, opening on 18 November.

In 2006 there were plans for the Fresh Express to be branded 'Real Food Company'. A change of owners meant that was halted, and EDC was launched instead.

In 2016 the westbound service area were refurbished. The former Upper Crust was replaced by an extended Costa, while Arlo's, Chow and El Mexicana replaced the westbound EDC. In summer 2016, BP refurbished their Wild Bean Cafés to their latest style, closing their M&S stores in the process.

At the start of April 2017, the eastbound side gained Moto's first Costa Drive Thru, which was built by moving the caravan parking. A westbound one was later built. In December 2017, a new Chow opened within part of EDC's servery, making EDC a lot smaller.

In May 2019, the westbound Arlo's closed to make way for a new KFC unit which opened on 1 July 2019, however the Chow unit opened as 'Breakfast @ Arlo's' during the morning period.

While a Greggs has been built outside, from the outside the westbound building is still close to its original design.

In late 2019, the tiny eastbound EDC counter closed. The westbound Breakfast @ Arlo's soon followed this and closed in December 2019 in favour of fast food options.