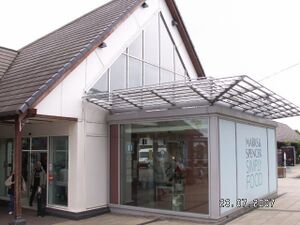 By the late 1990s, Granada felt that there was little potential for building new service areas, so instead they would have to expand by tapping into new customer markets. They decided their focus would be commuters, who weren't in the habit of using motorway service areas.

With that decided - and with franchised coffee brands having not fully taken off yet - Granada created 2Go.

2Go would be placed at the entrance to each service area, designed to catch people as they leave the building. It stood clear from the main restaurant area and was designed to offer a streamlined service. One drawing suggested each counter would have had only a Kenco coffee machine, an oven and a small food prep area.

The brand was designed by BDG McColl, with a triangle logo and the tag line 'fresh food to go'.

Granada thought 2Go would become a major part of their offer, and earmarked 35 service areas that would receive it. They added that the brand had been designed so that it could work in forecourts and hotels too.

In practice, only a couple of 2Go units were built, and it's not clear if they were ever used. When Compass took over Granada, they had access to brands such as Upper Crust, which they felt met the specification better. Those Upper Crusts later became Caffè Ritazza coffee shops.

In 2011 Moto introduced Costa and West Cornwall Pasty Company stands to the front of their buildings, recreating the 2Go concept. There can also be little doubt that Granada were right to focus on commuters: drive thru coffee shops are now a major feature of most motorway service areas.

It is not entirely clear if any sites opened a 2Go outlet, but quite a few were nearly opened: