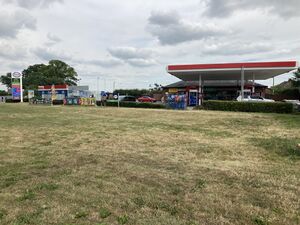 A303 at Hazelgrove Roundabout
(also accessible to traffic on the A359)

A small petrol station and McDonald's at the end of the Sparkford Bypass. Confusingly, when travelling west the signage provides directions to both Sparkford and Camel Hill services without differentiating between the two. Sparkford is the first exit.

Parking within the forecourt is limited to 20 minutes maximum stay and is strictly enforced.

Parking within the McDonald's or large vehicle parking areas is limited to 90 minutes maximum stay and is strictly enforced by MET Parking. 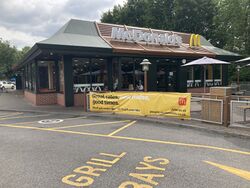 Before the Sparkford Bypass was built the A303 and A359 used to split in two, and run along what's now the northern and eastern boundary of this service area. A garage was positioned right in the middle, where the two met. It was known as Wakes Garage.

When the bypass opened in November 1989, the new roundabout was built on the western side and several options to expand Wakes Garage into a full service area were looked at by the owners and by Margram, including placing a more traditional roadside restaurant by the roundabout.

Eventually the original garage was demolished and replaced with an Esso filling station and SPAR store in 2000, operated by Chartman Retail, and a new McDonald's Drive Thru in the rear corner. McDonald's still call it their "Wakes Garage" branch. They are seeking to install an InstaVolt electric vehicle charging point in the car park.

In 2018, the filling station was sold to MFG after an investigation conducted by the Competition and Markets Authority. Following the acquistion, MFG rebranded the shop to Londis.

The petrol station is one of 87 petrol stations that MFG hopes to sell in 2022, under a deal with the Competition and Markets Authority.