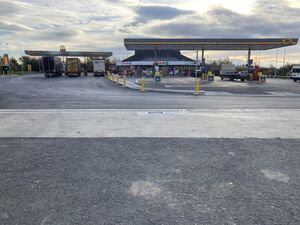 Newton Park services is technically on the A167, but positioned very close to the A1(M).

Parking within the McDonald's car park is limited to 2 hours maximum stay and is strictly enforced by Civil Enforcement Ltd.

Plans for a service area here on land at Hill House Farm go right back to 1988. The initial plans included a filling station, hotel, restaurant, farm shop and picnic area. Several variations of this plan followed this over the next 5 years.

A Shell filling station and McDonald's Drive Thru were the first to be built in 1996. The developers left plenty of space for an expansion to the west and to the south, including a whole parking area which wasn't used. There were plans to add an additional restaurant in 1997 but this was refused.

The hotel was then later added in 2002 in the form of a Sleep Inn, named 'Aston Hotel'. The hotel later became a Holiday Inn in the late 2000s, and gained a ChargeYourCar electric vehicle charging point in 2012 which has since been decommissioned.

By 2002 the filling station had rebranded to Jet. The sales building gained an extension in 2004 to add a café inside the building. This later became a Subway store in 2007, before being replaced in April 2020 by a dailyDeli counter.

On 15 March 2021, the Jet filling station closed for site refurbishment works, with both forecourt canopies replaced as well as adding a rear extension to the shop building to introduce new male toilets and showers and re-cladding of the shop building. The new site reopened on 12 August 2021.

The petrol station is marked as "Services" by the Ordnance Survey.

Outline planning permission was granted for the creation of an industrial estate in November 2019, called Forrest Park, which will be positioned north and west of the current service area and include 11 industrial units over 86 acres of land as well as 7 trade units, a 60-bed hotel and pub restaurant.

Further planning permission was later granted to EG Group in February 2020 for a forecourt and shop with concessions and a KFC Drive Thru to the north east of the Forrest Park site, directly opposite the current service area. The new forecourt opened on 22 March 2021, branded Shell, with a Greggs concession following on 26 March, and the KFC Drive Thru and Sbarro concession opening on 29 March.

The new development, which EG Group call 'Forrest Park services', presents considerable competition for the established service area. It remains to be seen whether the road signs will show any loyalty towards the original service area.

The Sainsbury's On the go store in the Forrest Park forecourt was rebranded to SPAR in late 2021. The Sbarro concession also closed in late 2021 and was replaced by a Pizza Hut concession in early 2022.