3 photos in the gallery

On 13 April 2021, Welcome Break's parent company were granted planning permission to build a motorway service area at Kirby Hill. Construction is due to start in summer 2023, and will take 12 months. It's likely to open as Vale of York services.

It's the second of two service areas which have been proposed here in the last 25 years. Arguments over the proposal have become one of the most memorable features of the A1(M) through Yorkshire, which is a rare example of a motorway built since service area planning was privatised.

Both proposals have been vociferously opposed by the Residents Against Motorway Services (RAMS), who will maintain their opposition. 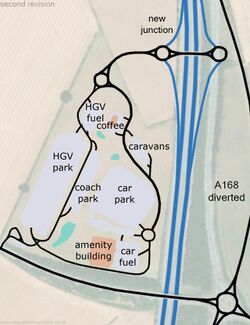 The approved plan was put forward by Applegreen in 2017.

They proposed an amenity building at the south of the site, which would be connected to the A1(M) by two roundabouts and a flyover, allowing access in both directions. The A168 would be diverted onto a new course to the east to steer clear of the new junction.

The masterplan name-checked Gloucester services as its inspiration. The main building would have a landscaped entrance plaza and a large grass roof which would extend over the forecourt and slope down to the ground, much like its famous inspiration.

Sample site plans show the rest of the amenity building to be very similar to Applegreen's other large service areas, with a single building that acts as both a forecourt shop and a catering building. There would be large windows along the front, a number of food units inside, and an additional seating area on the upstairs balcony. The HGV forecourt would be operated remotely, again in keeping with Applegreen's Irish projects, but once again this one would have a large green roof.

Parking would be provided for approximately 364 cars, 90 HGVs, 20 motorcycles, 18 coaches and 13 caravans. A staff drop-off and controlled access point would be provided on the B6265. No detail on charging points has been provided, but you can expect a large number to be added as the plans progress.

If built, the Vale of York service area will end a long monopoly held by Moto for service areas in the north east.

The A1(M) through North Yorkshire is one of the only major motorways to open since the planning of new motorway services was passed from the government to the developers in 1992. This part was opened in 1995, but the new road wasn't really joined up until 2012.

This has revealed significant difficulty. It is up to the planning process to decide between rival service area proposals, and this moves slowly. As a result, the A1(M) through North Yorkshire has seen numerous plans for new services, and several lengthy public inquiries.

Heather Ive Associates made their first planning application in October 1996, calling it Kirby Hill services. A second application was made in February 1997. As with many developers, had Heather Ive been successful, they would have been likely to sell the site to a well-known operator.

Heather Ive appealed both outcomes, as they weren't determined in time. In October 1998, a public inquiry considered these two appeals (though the first was soon withdrawn), alongside other planned services at Allerton, Arkendale and Wetherby.

In March 1999, the Secretary of State awarded planning permission to the Kirby Hill plan only. This decision was challenged by Harrogate Borough Council and later quashed. The inquiry was reopened in 2001, studying Kirby Hill and Wetherby, alongside Skelton Grange, Bramham Crossroads, Wetherby and Flaxby Covert. This concluded in 2005 with planning permission being awarded to Wetherby.

In 2008, Heather Ive Associates planned to build Kirby Hill again. Harrogate Borough Council argued that there was no need for the service area, and that it would cause "demonstrable harm". They refused the application, and Heather Ive appealed. A public inquiry in 2011 described the "visual harm" and "adverse affect" on the landscape; it also referenced the local opposition and the time it would take to build, before rejecting the scheme in favour of Leeming Bar. 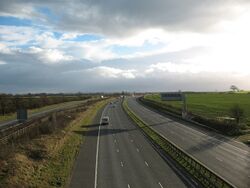 The planned site of the service area, to the distance on the right.

In 2016, it had been reported that the Irish forecourt operator Applegreen wanted to break in to the British motorway market. They registered a number of planning applications, including another one for the same site at Kirby Hill, now called 'Vale of York'.

In 2019, Applegreen broke in to the UK market by acquiring existing operator Welcome Break. As part of the takeover agreement, Welcome Break would become responsible for most new projects and Applegreen's largest sites. The Vale of york proposal was considered to be good territory for Welcome Break, and continued.

The proposal initially showed a looped arrangement for the northbound slip roads, which attempted to match the field boundary. This was later revised to use more standard, straight slip roads, probably so that abnormal loads could stop on them.

Planning officers recommended it be approved, but Harrogate Borough Council's Planning Committee unanimously voted it down. The reasons they gave for their decision were that the scheme was contrary to the Local Plan; it represented an unjustified encroachment into the open countryside; it was not sustainable development and it would harm the local environment and the economy of the nearby market town of Boroughbridge.

Applegreen appealed the decision, and another public inquiry was held in February 2021. This time, it was considered alongside an appeal from Moto, relating to a nearby site at Ripon, at A1(M) J50. The Yorkshire Post took an editorial position against the Kirby Hill plan.

In April 2021, the planning inspector approved the Kirby Hill appeal, and refused the Ripon appeal. He acknowledged that both proposals had considerable negative factors, especially the loss of agricultural land, however he concluded that it met a "demonstrable need" for a new motorway service area that outweighed the disadvantages.

Opponents will ask why the 2021 inquiry reached a different conclusion to previous inquiries, when many of the key arguments remain the same. The most likely answer isn't unique to Kirby Hill: since the previous inquiry was held in 2011, government policy has changed to become more in favour of roadside development. In addition, the A1(M)'s main service area at Wetherby has now had time to bed in, as has the new A1(M) itself. On other hand, during that period the environmental arguments have also become more pertinent.

Just because it has been approved does not automatically mean that it will go ahead. The developer may decide not to proceed with it, although that seems unlikely given the effort made so far. Equally, the objectors' continued fight may see the decision overturned. Harrogate Borough Council have already been accused of having "massaged" their landscape report, but an investigation found no irregularities.