Burtonwood services was opened to bids in 1971. Burtonwood was seen as a barren site, far from any junctions, with a lot of land available. Its close proximity to Liverpool was believed to be an advantage, with a lot of HGVs needing somewhere to stop, as well as higher traffic levels.

An exception was made to the rule to allow the last two to enter, and Forte won.

The service area originally consisted of two small, octagonal, pagoda-style buildings which were both clearly visible from the motorway. They had a white fascia, set back windows, and a path running all the way around. The two were connected by a pedestrian subway, and both had their entry and exit feed directly onto the M62.

"One had to make the building as startling as possible."
Patrick Gwynne, architect

The architect was Patrick Gwynne, and he created the tall roofs to hide the water tanks and chimneys. The flat, empty landscape meant that the tall buildings could also be used to attract motorists' attention as they approached. Forte wanted the roof to be painted red, but planning permission for that was refused and Mr Gwynne instead chose copper tiles, with the intention that they would soon turn green.

Inside each building was a transport café, a waitress service restaurant, a standard café, and toilets. The octagon shape helped create a central kitchen area, that made the operation appear compact from the outside. Forte were said to be very pleased with the design of the buildings, and commissioned the same architect to design Chigwell soon after.

In 1977, Egon Ronay called it "pleasantly decorated", "comfortable" and "clean".

A hotel was built on the westbound side in late 1990, branded Travelodge. At the time each building had a The Granary restaurant and The Shop. 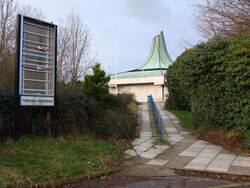 The abandoned westbound building, pictured in 2008.

While Burtonwood was going through the planning and construction process, Liverpool's economy experienced a major downfall. It had been designed to cater for HGVs heading for the docks, HGVs delivering goods and wealthy car drivers having a day out, but when it opened these customers were nowhere to be seen. Architect Patrick Gwynne has since suggested that this unfortunate turn of events was one of the only times Forte ever made a business error.

"It was, very sadly, a commercial flop. A great pity."
Patrick Gwynne, architect

Although Liverpool did start to rebuild itself and repair its reputation, the traffic on the M62 was mostly commuters and they weren't interested in the restaurants at Burtonwood. Burtonwood struggled greatly to attract any trade throughout the 20th century, and as a result it received little investment, which in turn encouraged more customers to stay away as regular road users reported that it was badly maintained and that the empty car parks were unsafe.

During winter, the westbound building would be closed and pedestrians would be directed through the subway under the road.

When plans were announced to build a new junction on the M62 next to Burtonwood, serving the developments which are now known as Omega and Gemini Retail Park, new owners Welcome Break were alarmed. They felt that the additional competition would further jeopardise the sensitive financial position at Burtonwood.

Welcome Break proposed a compromise, whereby the new junction and retail parks would be built, but they would be allowed to close the westbound half of Burtonwood services, and take advantage of the new junction to direct all motorway traffic over to the remaining half of the service area. The quieter westbound side, with its valuable land that was close to the retail parks, was the obvious candidate for closure. This was suggested as early as 2000, and it was finally put into play in 2008.

The new junction was built in 2003, and between then and 2009 the westbound exit from the service area fed into the new junction. From 2008, the westbound building was closed but its direct access from the M62 remained for some time, with a small sign in the car park directing customers out onto the roundabout, where they could turn around and use the eastbound facilities.

To make this possible, the eastbound side's road layout was changed to allow two-way traffic, with the old rear access onto what had been Burtonwood Road being opened to the public. This makes for a strange experience: the road was clearly designed as a small lane in the middle of nowhere; it's narrow, unlit, has no footway, and takes a meandering route around the hills, but it's now carrying a lot more traffic between the brightly lit service area and the busy industrial estate.

The old westbound side was demolished in 2009 by Marshall and proposed for development. This would include a Travelodge, Starbucks and a Harvester pub-restaurant, but the majority of it was set to become offices. The shape of Charon Way still shows us where the old service area boundary was.

Burtonwood's history meant that its buildings had never been extended. As a result, halving the site meant the choice available had to be reduced. Initially, and unusually for a Welcome Break at the time, they went without a Burger King or a Coffee Primo coffee lounge. Closing the westbound side also meant losing the hotel.

It's now a Starbucks and KFC which operate from the centre of the round building, with seating all around the side and toilets and WHSmith at the back. Their condition was vastly improved after the site was consolidated. The coach parking was turned into a formal coach interchange, bringing in a little more trade.

David Cameron called at Burtonwood in July 2014, while he was Prime Minister.