Forecourt: on both sides: Esso, SPAR, Starbucks on the Go, AdBlue4You
and eastbound only: Free Cash Machine

Short stay HGV parking is available on the eastbound side only, with overnight parking charged at £14.99 per 24 hours. 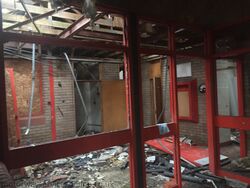