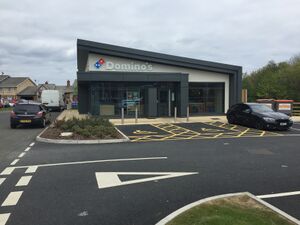 Domino's Pizza is a takeaway chain which has had several brief attempts to cover the motorway network.

In 2011 it was planned to be rolled out to most Moto services, but their only store on the motorway network at Leigh Delamere closed and moved to nearby Chippenham. There had been plans to put a Domino's in the new Cherwell Valley, but this never happened.

As a new brand, Domino's big party trick was that customers could order their pizza in advance through their mobile-optimised website or one of their apps, minimising the amount of time the customer had to stop for.

Domino's experience on the motorway has therefore been short-lived, despite rivals Papa John's Pizza and Pizza Hut both having a slightly better ride - though they have both been withdrawn too. Sit-down restaurant PizzaExpress has now become the main pizza provider on the motorways.

One more branch of Domino's operates out of the service station at Grange Park on the A45. An additional one was recently built on the A19.

In August 2013, Extra announced that it would be introducing a new express Domino's Pizza outlet to their sites called 'Domino's 2Go'. The first opened at Beaconsfield with the rest opening in October 2013.

The Domino's 2Go menu offered a slightly smaller menu than the regular Domino's offer. By the end of September 2015, all Domino's 2Go outlets had been removed.

Domino's 2Go used to operate at the following motorway services: