Unbuilt Services On The M20 and M26

For a list of current service areas on the M20, see Services on the M20.

While at its heart the M20 may be a 1960s motorway, with the Maidstone Bypass being one of the UK's oldest sections of motorway, in reality it still had a large gap in it until 1991.

With facilities available on the old A20 that linked the M20 together, there wasn't much need for any service areas - but the planning was there.

The M20's service stations all revolved around Detling. A service area planned at Honeyhills Woods, on the original Maidstone Bypass section, was pencilled in as early as 1962. With the motorway already open there was no need purchase the land until it was ready to start work.

By 1972 a fuller strategy had emerged. There would be:

For reasons that are unclear, the service area planning always measured along what's now the M26, rather than following the actual course of the M20. It doesn't seem to be until the 1980s that the northernmost section of M20 was included in the plan with the addition of West Kingsdown between J1 and J2.

This decision may have been delayed by confusion about the route of the M25. Until 1976, the motorway which meets the M20 at J1 would have been called the M16, and it was likely to have its own service area named Pedham Place at that junction. Mobil then proposed to build it, which was debated from 1977 until 1985. The Pedham Place option was totally ruled out during the M25 consultation, largely because the roundabout would be too congested.

The road that is now the M26 - originally supposed to be part of the M25 - was going to have its own service area at Chevening.

Why It Didn't Happen

The Detling site initially received an objection from the Landscape Advisory Committee. This was resolved and it was expected to go to tender in 1974, with an opening in 1977. There is no record of it having been opened to bids, which would suggest it was delayed. This would fit with reports that an alternative option at Hollingbourne was being considered.

In 1978, Kent County Council signalled their preference for building a smaller service area at Hollingbourne. As well as being smaller, and less likely to cause problems with it being too close to the junction, it also saved destroying any woodland. The plan was backed up by the Prior Report of 1978, which encouraged service areas to be built at junctions.

In 1986 the "M20 policy" was announced, which confirmed that Hollingbourne would be built. It eventually opened in 1998 as Maidstone services, replacing the Detling option.

In the 1990s, M20 J7 was replaced by a new junction to the east. This would have moved it far too close to the service area, had Detling been built.

At the same time as the M20 policy was published, there was an attempt to purchase the land at Stanford. Progress was delayed by the fallout from the High Court case over Clacket Lane, which had criticised the Department's procedures. It was opened to bids in 1992, but no suitable replies were received. It was eventually built privately and would go on to be described as a "commercial failure".

Meanwhile at West Kingsdown, the Department of Transport applied for planning permission for a 40 acre site in 1985. It was later mentioned that Esso were involved in the plan, and it could be one of England's first private initiative sites. Another proposal was associated with Allied London Properties, who submitted it privately via the planning system. A public inquiry was held in 1986. When service area planning was privatised in 1992, West Kingsdown didn't get mentioned as an ongoing project. It has since been proposed several times. 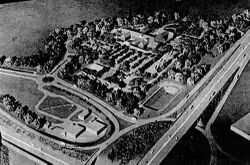 A model of the planned 1986 Pedham Place services.

Some of the new motorway services once planned for the M20 and M26 we have uncovered include:

In addition to these, several service areas have been proposed on the A20 Swanley Bypass.