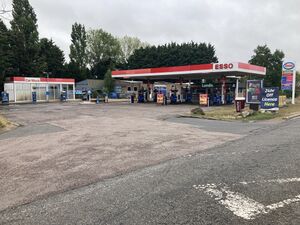 A605 between Oundle and Peterborough

A petrol station and workshop on the A605. 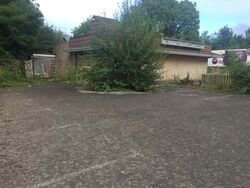 The abandoned diner which once played home to Little Chef.

There is a pair of bus stops outside close to the service area, which receive a regular service. Despite the Little Chef having closed in 2004, NaPTAN (which is the source of most journey planning services and bus stop announcements), still calls both bus stops "Little Chef" (as of 2022), and indeed this name is still advertised at the stops themselves.

A petrol station opened here next to the original path of the A605, operated by Kamper Services. The road was later diverted away, allowing the old road to be used as HGV parking.

A Little Chef opened in the next parcel of land in 1984. There were plans to add a Travelodge but this didn't happen. The restaurant closed in around 2004, becoming Peranakan Café and then Jem's Diner. It is now abandoned.

The forecourt was previously branded Q8, and later Jet. Evidence of its Jet-branded past could still be seen on the shopfront branding until late 2020 when MFG rebranded the store to Londis.

MFG currently hold planning permission to redevelop the site, demolishing all of the buildings and providing a new forecourt with separate islands for HGVs and smaller vehicles. There will be a new sales building in the middle of the site and a Starbucks Drive Thru on the site of the former restaurant. The plan also includes provision for four electric vehicle charging points.